Good for what ails ya

Tokyo Game Show is done, and I’m back in Tokyo (as opposed to outside Tokyo, where I was for Tokyo Game Show) for a couple of days to (hopefully) drum up some work. I think today I’m just going to lay in my hotel and quietly let my body heal, though. It’s been a rough couple of days full of people. People are exhausting, as it turns out. I think I will avoid them for today. But it’s all been for the best: we have at least two episodes of Bonus Stage in the bag now, and shockingly enough the sound quality for the episode of Retronauts we recorded last night while sitting around an iPod microrecorder is more than good enough to use as an actual podcast.

Also, last night we were able to hit a bar in Shinjuku that I’ve heard about for years: 8-Bit Cafe. As you might guess from the name, it’s very video game oriented! It’s a fairly small place on the fifth floor of a scary and uninviting building — there’s a Russian porn shop on the main floor — but inside the bar is a huge collection of random old video game stuff. Sadly, they have a no-pictures policy, but trust me when I say it was vaguely like my definition of what the afterlife might be if I live a good life, except more crowded and with a lot more cigarette smoke. Lots of ’80s memorabilia, including tons of Takahashi Meijin merchandise and an abundance of Urusei Yatsura and Maison Ikkoku goods as well. And a couple of game systems hooked up to a TV in the corner.

Somehow Sam and his friends and I ended up playing through Final Fight 2 for Super Famicom, which was a total waste of an hour. But worth it for the way Sam breakdanced the final boss right through his dojo wall, I think. Also, it gave us an excuse to imitate Haggar for an hour. 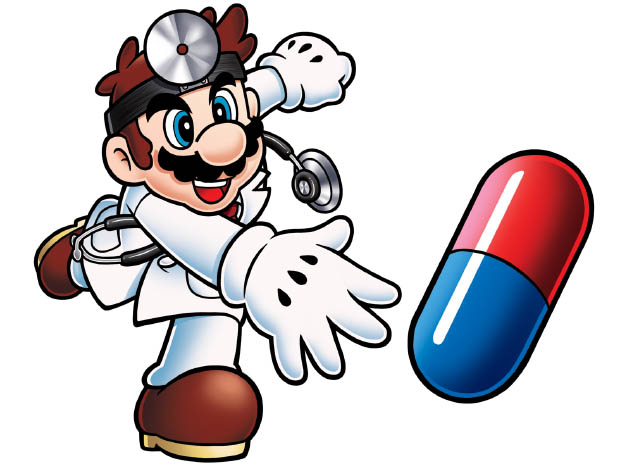 They also offered a small number of game-themed drinks. A few others had the Princess Peach, which was overwhelmingly Peach flavored. Me, I had the Doctor Mario. It was…Dr Pepper, mixed with something fermented, served in a Pyrex flask with a side of candy pills in a petri dish. Amazing.

11 thoughts on “Good for what ails ya”