TGS 08: The four food groups of the apocalypse

One of the best parts of coming to Japan, of course, is the food. Japanese food exists at extremes; it’s either incredibly good or utterly nauseating. Although some of my favorite spots from years past (namely the ramen hole and Little Spoon) are now somewhat less than amazing. But anyway! I admire these extremes, and I hope to experience them whenever possible.

To that end, when I was out foraging through convenience stores for a midnight dinner after arriving way too late in Shibuya due to flight delays, I could not resist something called “A taste of the BREAD.” Sitting on the shelf of a Lawson’s, it appeared to be a bread roll wrapped in brown wax paper. Yet! Yet the flavor, I parsed, was “teriyaki burger.” My guess was that it would be hunk of bread chemically treated to taste like a teriyaki burger. Disgusting! So I had to try it.

To my amazement, though, the truth of this food item was far worse. Sitting on the shelf, unrefrigerated, was in fact…a teriyaki burger. 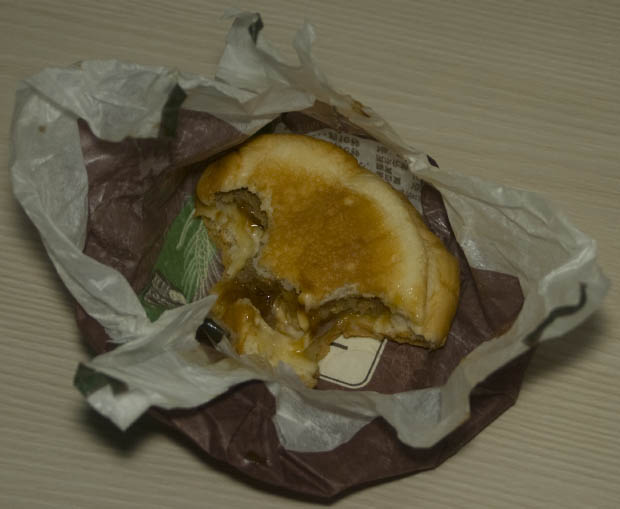 Yes. It was actually much worse than it looks, and it looks pretty bad. I hate wasting food, but this was all I managed to choke down before I began questioning my will to live. It tasted like a White Castle, was the size of a McDonald’s burger, and made me question how a kind and loving god could allow such atrocities against his people. Now I don’t know much about this crazy world we live in, but I’m fairly confident in stating that meat is not something you leave sitting around in a convenience store at room temperature. To my mind, this suggests that what I ate was either (1) not meat or (2) pumped so full of preservatives that I’ve just saved my next of kin a load of money on embalming fluid.

Alarmingly, this was hardly the only “A taste of the BREAD” product on sale! They also had many other “meat” products, including a sausage egg roll whose egg component oozed nauseatingly off the bun and onto the clear plastic in which it was wrapped. I suppose that should have been a warning, but I always want to believe the best of others. My faith in human nature will be the death of me, or at least the terrible stomachache of me.

I’ve developed a theory about this sort of food product, though. My guess is that it stems from Japan’s apocalypse-oriented state of mind which causes the entire nation to be perpetually braced for a devastating earthquake, a nuclear holocaust or a huge radioactive lizard emerging angrily from the sea. We are not intended to eat foods like Lawson’s “A taste of the BREAD” line now. Rather, the nation conscientiously keeps these barely-palatable preserved foodstuffs stocked as a matter of preparedness. When The Big One hits, the survivors will be able to subsist for weeks on the psuedo-burgers, thus remaining alive until the Japan Self-Defense Force gets its act together and sends in the rescue crews.

You have to admire such a forward-thinking sort of food. You should not, however, eat it. At least not until Tokyo Tower falls. (Which was of course constructed to serve as the city’s early warning indicator — all disasters, natural or otherwise, are intrinsically drawn to Tokyo Tower.)

19 thoughts on “TGS 08: The four food groups of the apocalypse”