Another month, another frivolous squandering of cash moneys: I have purchased the follow-up to that G.I. Joe DVD “battle pack” set I bought last month. While I doubt any toy in the future history of mankind will ever hit the same sweet spot of ’80s nerd nostalgia and quality as the previous pack I do have to say this one ain’t too shabby, taken on its own merits.

The second set is based on the cartoon’s second introductory mini-series, “The Revenge of Cobra.” A very original title, befitting the show’s very original premise of Cobra creating some sort of terrible device for world conquest (in this case, a weather-control machine called the Weather Dominator) only to have its vital components flung across the globe, thus instigating a race against America’s daring, highly-trained special missions force to collect them first. In other words, it’s exactly the same plot as the first mini-series. But then, it was aimed directly at 8-year-olds, and as a former 8-year-old I can speak to its effectiveness in convincing me to buy new toys. Heck, it’s still working, as you can see. 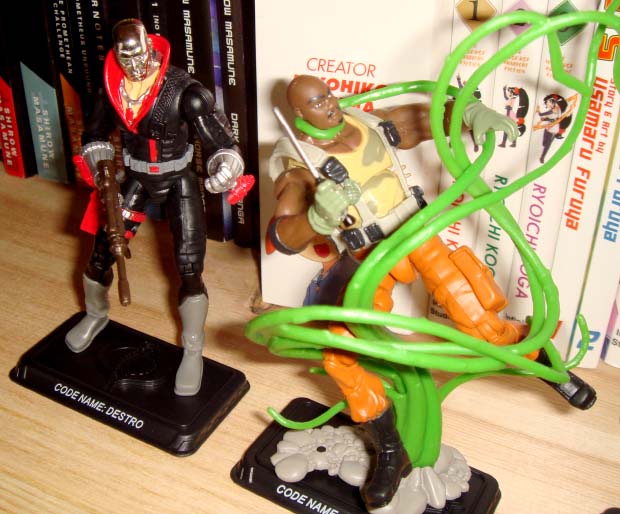 This set consists almost entirely of “animation style” repaints of existing figures. “Animation style” basically means “bolder colors and less painted detail.” In other words, they’ve finally managed to justify cheaping out on rehashed sets. Although, yeah, OK, the repaints are pretty decent; Roadblock is a bit garish, but Destro with his vivid red collar and chromed head looks almost (almost) as iconic as his pimp daddy iteration.

However, even more than with the previous collection, it is the accessories that set this collection apart. Hasbro has managed to create what may be the first-ever living tentacle vines that aren’t dripping with unpleasant overtones of sexual violence. Of course, it certainly helps that they’ve essentially designated Roadblock as the tentacle-ee rather than the character Japan’s Nerd Hummel industry would have selected: 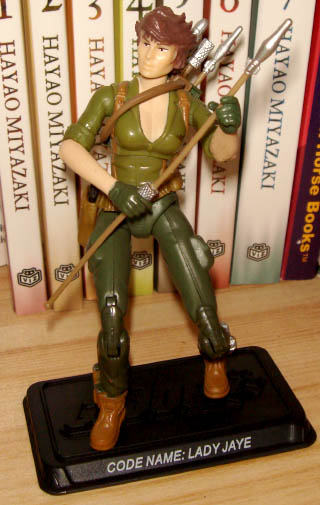 Why yes, it’s Lady Jaye, the cigarette-voiced warrior woman who dominated the cartoon. Not in a kinky way! I just mean that she had more lines of dialogue in the course of the series than any other character, except I think for Cobra Commander (who was trotted out to be the shouty angry instigator in nearly every episode).

No, I didn’t count their lines of dialogue myself. I read it somewhere. Which means someone did count them, somewhere, but I can happily say it was not me.

Anyway, this figure is actually pretty interesting since it manages to depict the character the way she was shown in the TV series — bare-headed and wearing a shirt and pants rather than sporting her usual ball-cap-and-jumpsuit combo. I never really understood the ball cap, but at least her uniform was green. That put her miles ahead of dudes who wore football jerseys into combat. I also never understood the weird robo-javelin thing her normal figure came with, but no matter in this case: she’s equipped with a spear whose tip can be swapped out for alternate heads. Explosives, netting, whatever.

She’s basically the Penguin, except with javelins instead of umbrellas. Also: cleavage. 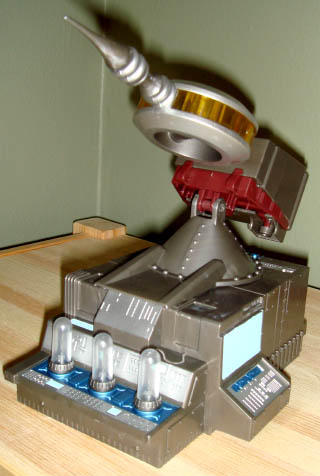 Also included is another component of the M.A.S.S. device, which I’ve just realized is actually going to be freaking humongous once completed. This set contains the bottom half of the main base, which is on the back side and includes the control interface.

Also included is a miniature Weather Dominator, which is the thing on top. Memory tells me that the M.A.S.S. Device and Weather Dominator never actually shared screen time, but you can nevertheless affix the latter atop the former thanks to a triangle of pegs and corresponding holes. It’s kind of a nice touch that suggests someone at the company stopped for a moment and said, “You know, while these toys are really directed toward pitiful man-children frittering away their so-called adulthood on nonsense, it’s theoretically possible that a child might somehow accidentally buy both of the sets. Maybe we should give them some added play value so they don’t have to buy the full set of five.” And so they did.

Meanwhile, the Weather Dominator itself shatters into three pieces, which you may then mail to Bolivia or wherever so that your Joe toys can go on an exciting global adventure to track them down before Cobra does.