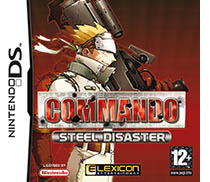 The tragic bellyflopping of great Game Boy-family titles like Shantae and Ninja Five-O made me realize that portable gaming consoles have a tendency to play host to some of the finest under-the-radar creations the industry has ever seen. The combination of low development overhead and the general public’s habit of thinking of handhelds as the domain of kiddies means that plucky little gems can often go unnoticed. So I’ve taken to watching for random, what on earth is this releases. This week, XS’s Commando: Steel Disaster for DS seems poised to slip between the cracks. Next week, it’ll apparently be Mazes of Fate DS. The fall rush: a magical time when everyone releases their games, even games that stand zero chance of being noticed amidst the big-name titles published by companies who can actually afford to have an ad budget. Le sigh.

But what is Commando: Steel Disaster? So far as I can tell, it’s pretty much a complete Metal Slug rip-off. As a matter of fact, I believe this debuted a while back under the title 07 Commando, upon which debut it was soundly excoriated for shamelessly swiping from SNK’s side-scrolling masterpiece. And from what I’m seeing here, there’s not much reason to doubt that it is, in fact, an off-brand knock-off.

Still, sometimes an uninspired knock-off can be perfectly fun! If you’re going to plunder someone else’s hard work, you might as well scavenge from the best. The question is whether or not Steel Disaster steals well, or if it simply embarrasses everyone involved: us the gamers, SNK the creators, XS the, uh, borrowers.

I decided to grab a copy while I can, because this strikes me as the sort of thing that will be published in dangerously low quantities, ship to a handful of retailers and promptly disappear. And, also, because I am a hopeless sucker for big, colorful, hand-drawn sprites.

Unfortunately, I can’t test its Metal Slug-ness myself at the moment, because I’m totally swamped with stuff to review. Away: Shuffle Dungeon and Chrono Trigger and Wario Land aren’t going to play themselves, I fear. So, if anyone out there has the courage to be a hero and take this bullet, please do let me know how it turns out.