This week’s Fun Club selection in the forums is Galaga Legions. You should buy it, and play it, and talk about it. And here is why. 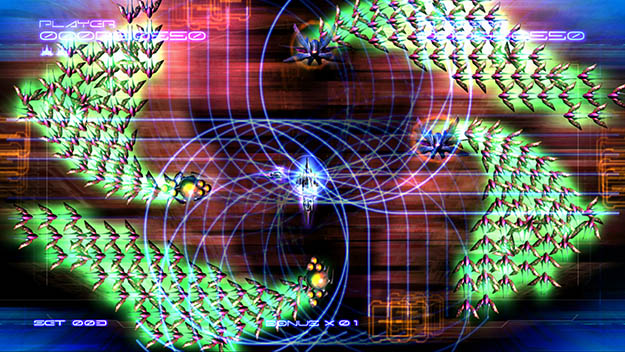 Basically, it’s brilliant. Of course, you probably won’t think so at first glance. What do massive, undulating swarms insects have to do with Galaga, you’ll wonder. Whose idea was it to turn a classic arcade shooter into yet another tired twin-stick Geometry Wars clone? That would be fine for Robotron or some nonsense, but Galaga? Heresy!

But let it sink in beyond that first impression. And consider this: Legions isn’t really a sequel to Galaga; it’s a sequel to its sequel, the forgotten (but exceptional) Gaplus. Maybe you’ve seen it on one of the PlayStation Namco Museum collections, but I don’t think Gaplus has put in many appearances since then — which is a shame, because it’s an underappreciated classic. Gaplus inverted its predecessor’s most interesting mechanic, which allowed the enemy craft to capture one of your fighters, by letting you capture them and make them your subordinates. Legions does this from time to time, and it works wonderfully, essentially turning your ship into a nigh-indestructible ball of death.

It also represents a rethinking of many of Galaga’s fundamentals. For instance, rather than force you to allow your ship to become captured and reclaim it, it simply starts you out with two indestructible assistant craft. These work somewhere between the Bit from R-Type and the “programmable” Options from Gradius V; while you can leave them by your side for triple fire (and in fact will earn an Achievement for doing so), you can also maneuver them with the right stick, setting them at specific points to fire in a given direction. This is incredibly intuitive — simply tap the right stick and you’ll drop a flanker in your current location, primed to fire in the direction in which you pressed the controller. Alien craft swirl in from all sides, but their paths are tipped in advance with a glowing streamer that defines their attack patterns and locations. Success boils down to learning to read these hints and laying down suppressive fire accordingly. Helpfully, you can move around the entire screen, which gives it a tiny hint of Geometry Wars from time to time — and occasionally even a whiff of bullet hell as you swerve between bolts of enemy fire and let your flanking craft do your heavy lifting for you.

Yeah, so I like it. I feel like this entry lack sufficient snark to be a blog post, so pretend I just said something rude about your hygiene.

5 thoughts on “Legion of super excellence”