It’s not your birthday, it’s not today

It is, however, Chrono Trigger‘s birthday, and to celebrate the occasion the Square Enix blog has posted up the box art for the DS port. Sadly, it’s much less barren and pathetic than the placeholder from Amazon.com. No, it’s pretty much perfect. Now I have to buy it. 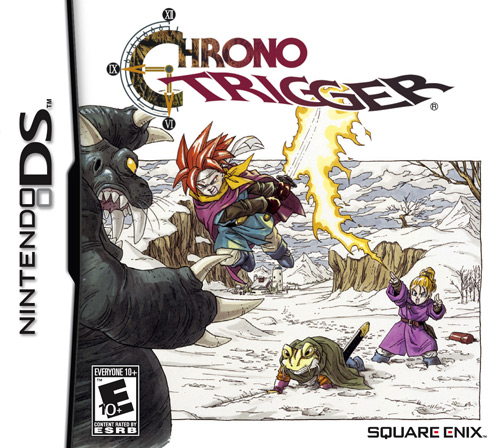 Weirdly, the news that it was released thirteen years ago today doesn’t make me feel incredibly old, for once. It really does seem like it’s been a long time since the game first arrived — and I think it may actually have been the first game I ever rushed out to buy on its launch day. I swapped a handful of games (including Final Fantasy III) to be able to afford its ridiculous price on my starving college student’s budget — after tax, it would have cost me an unthinkable $90 and change. Instead, I got it for about $20.

As many times as I played it, though, I probably would have gotten my full value from paying Babbage’s marked-up retail price. I earned every single last ending for the game, explored every possible nook and cranny, even managed the ridiculous, you’re-not-really-supposed-to-do-that feat of besting Lavos in the Ocean Palace without my characters anywhere near their maximum stats. I even called the Nintendo tip line to figure out how I was supposed to save Schala, ’cause clearly that bit about “someone close to one of you needs help” line in the End of Time couldn’t possibly mean anything else. (Apparently, though, it did, and I spent a buck-fifty to find that out.) I still remember most of the game’s original dialogue word-for-word, too. It’s kinda bad. Worse than that is the fact that I actually quit a job so I could play it — although admittedly I was going to quit a week later to make time for school, and the job was really depressing and awful anyway. But still! You World of Warcraft social pariahs got nothin’ on me.

I won’t be so presumptuous as to claim Chrono Trigger is the greatest game ever, or anything outlandish like that. But it is one of the most thoroughly enjoyable games ever, and that probably counts for a lot more in the long run.

32 thoughts on “It’s not your birthday, it’s not today”