Are you sick of Bionic Commando yet? No? Well, listen to the latest Retronauts and maybe you will be! I also, you know, reviewed the remake. Spoiler alert: I liked it. 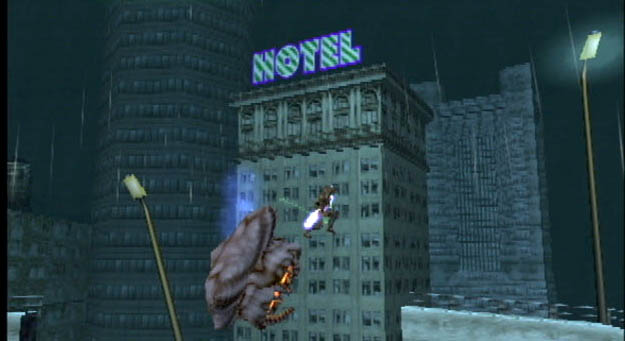 Whenever the subject of games that borrowed liberally from Bionic Commando comes up, someone always mentions Spider-man 2 for last gen’s consoles. Whatever! Yeah, you swung there, but there was no skill involved. Spidey could swing by using thin air as a grappling point, which is just silly. A much better representative of the Bionic Commando swing mechanic is a little-known and incredibly-hard-to-find-info-on PS2 game called Chain Dive.

Chain Dive is probably best described as the boss battle in the Sky Palace of The Legend of Zelda: Twilight Princess transplanted into the futuristic city from Strider 2 and turned into an entire game. The levels are almost entirely aerial, with the hero grappling between tiny points and evading enemies by flinging himself from link to link. It’s very exhilarating, and kind of tough. But fun!

Too bad I gave away my copy, because it’s stupidly hard to find these days.