The universe is so screwed 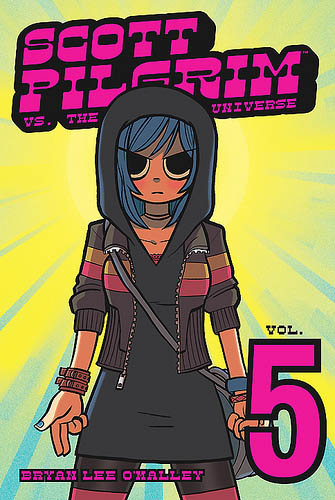 ‘Cause Scott Pilgrim is gonna kick its butt next February. Well, actually, knowing the way these things go, the universe will probably kick his butt instead. Still, you gotta respect his moxie. The important thing, of course, is that the next book has been dated. (February, like I said before.) That is rad.

MEANWHILE: I wasn’t kidding about cutting off inquiries about contributing to the site. I appreciate the enthusiasm, but now I have 30 to wade through. That is a lot! I think it’s gonna have to wait until I get back from Tokyo. Three weeks of work-related travel is taking its toll on me. On a related note, the next issue of GameSpite is going to work a bit differently than previous ones as well — it was supposed to launch this weekend, but I’m still working on it. So it’s probably going to be completed in two or three plus-sized installments rather than the usual four.

Also, I’ve put more stuff on the auction block, including some rarities likes Judgement Silversword. Selling has been kind of liberating, actually. It’s nice to own less crap. My goal now is to reduce my total game collection to about 150 or so by the time this is all said and done. I’m really shocked by how many games I own; when you work with them for a living, they pile up faster than you can keep track of. But you know, I moved to San Francisco with all my essentials crammed into the trunk and back seat of a Nissan Sentra — an older Sentra, at that, from before they super-sized them — and I kind of miss that minimalism. I just have to take care not to get carried away…I keep finding myself thinking I should sell my TV and current-gen consoles, too. Which would be a bad idea, I think, if I intend to continue writing about games.

24 thoughts on “The universe is so screwed”