The merchant of menace

I may have mentioned it before, but this review playthrough of the Dragon Quest IV remake is the first time I’ve ever played the game, period. (Unless you count a couple of hours with the import version of the same remake, but eh.) I’ve just now reached chapter three and the tale of Torneko, aka Taloon, now properly known as Torneko Taloon, who like his friend Ragnar McRyan seeks to appease both Japanese language edition purists and NES translation purists alike. Such purity, indeed!

Anyway, Torneko is awesome. I understand can see how he launched his own cottage industry of roguelikes — his chapter of the game is unlike anything I’ve ever experienced in a console RPG. It’s more like something out of Ultima Online, really. 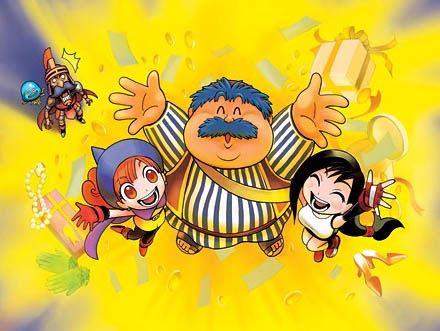 You probably already know this, but Torneko’s chapter isn’t about saving the world or anything, although he does eventually become caught up in the game’s bigger plotline, which does indeed involve saving the world from grim and certain disaster. But he starts out as a simple, unassuming merchant, a modest family man seeking to make his fortune in the world by traveling the deadly wastes to find somewhere to set up his shop. Much of his story, I’ve found, involves going to work every day and trading with a steady stream of customers, slowly building up his earnings until he can afford to buy the gear necessary to strike out on his own and find success. Every once in a while, you’ll get lucky and someone will come trade a phenomenally expensive item which nets Torneko a huge commission… but mostly slow and steady does it.

It’s not very exciting, and I feel like I should hate the repetitive randomness of the whole process, but I’m really enjoying it. Torneko’s nine-to-five is a welcome counterpoint to the usual monster-slaying and level-grinding of console RPGs, and Torneko himself is incredibly likable despite having no dialogue whatsoever. He’s a stout fellow with a loving family and a hometown rife with Cockney accents, for some reason, and such is the nature of Dragon Quest’s minimalist style that these minor attributes are sufficient to make him thoroughly endearing. I’m starting to understand why this series is such a monster in its native land.

Uh, and I was lying about the menace thing. Torneko’s pretty much the opposite of menacing. I just thought it was a punchy title. Surely you don’t expect journalistic integrity here, of all places.

10 thoughts on “The merchant of menace”