Unsurprisingly, WALL-E was quite good. I don’t think I enjoyed it quite as much as The Incredibles or Ratatouille, but hey — we can’t all be Brad Bird. Besides, making comparative evaluations of Pixar films has become an exercise in splitting hairs; the movie was easily right up there with Monsters Inc. and Toy Story 2, which is to say so much better than anything anyone else is animating these days as to exist upon an entirely different plateau.

Only Pixar would have the courage to ask, “What if R2-D2 had starred in I Am Legend instead of Will Smith?” Their answer: A surprisingly melancholy film with a palpable — painful, even — sense of loneliness. Well, that’s the first 30 minutes, anyway. Eventually the setting and tone change considerably and WALL-E becomes more of your standard cartoon; a bit of a letdown after the earth sequences, which do an amazing job of creating a sensation of isolation without the bleakness of something like Legend or Cast Away. And I’m quite alright with the underlying theme of the movie, which not-so-gently chides American excess and our willingness (or perhaps I should say “contentedness”) to let the truly good things in life slip past unnoticed as we become wrapped up in the petty and the self-indulgent. Still, the tenor of the “homilies in space” portions of the movie lack the somber austerity of its opening moments, though they certainly never descend to the level of obnoxious idiocy like the Madagascar 2 trailer that ran before the flick. (I’m pretty sure Pixar lets Dreamworks attach its previews to their films simply for the sake of sabotaging the competition.) Happily, the payoff for the entire movie is the greatest credits sequence I’ve ever seen, which depicts the reclamation of a ruined world in a series of stylized illustrations that parallel the course of reconstruction with the evolution of art.

Honestly, the only real disappointment with the movie is that Pixar has licensed WALL-E action figures. I mean, sure, it makes sense; the robots, like the titular Cars of a couple summers past, look to be designed in part for the sake of selling toys. (Or maybe iPods, in EVE’s case.) And they sure weren’t raking in ancillary dough with Ratatouille. But doesn’t churning out needless plastic items sold strictly to line a corporation’s coffers at the expense of sheep-like consumers pretty much fly in the face of everything the movie’s about? Ah, well… I suppose integrity and sincerity can only be expected to go so far, even with the likes of Pixar. 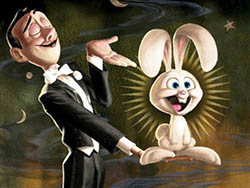 But you know what was truly great? The opening short, which I think was called Presto. It was five minutes of physical cartoon comedy channeling the best of classic Warner Bros. and somehow out-Bugs-ing the finest Bugs Bunny cartoons ever made. It lacked the emotional resonance of WALL-E, obviously, and didn’t bother with anything so mundane as “themes” or “subtext.” It was simply manic, inventive visual slapstick. But of the two, it was Presto that left me choked up — not because it was a touching tale or anything dumb like that, but because I realized that I had just experienced something I didn’t even know I missed. For just a few minutes, someone had resurrected a dead artform and breathed new life into it, and when it ended I recognized the rarity of what I had just witnessed. It was as though a dodo bird had emerged from extinction and nuzzled up against me, affectionately, before laying down and expiring to mark the final passing of its kind.