I have a fairly long-running tradition now of always eating sushi on the Fourth of July. (The one exception being a couple of years ago when my parents were visiting and we ended up going out for Chinese instead. But I ordered fish, so it almost counts.) The tradition started out, I think, as an attempt to be ironic — ho ho, uniquely Japanese food on Independence Day, aren’t I clever — but now it’s just an excuse to eat raw fish. I mean, who wouldn’t want this? 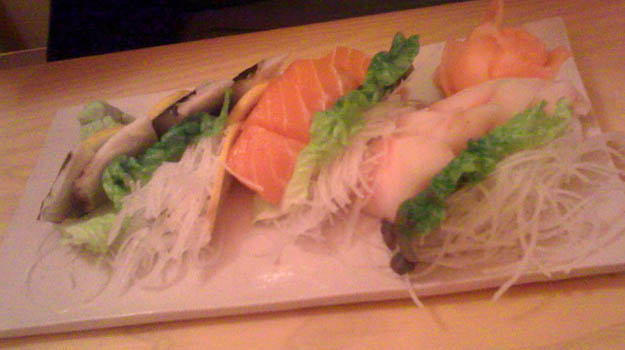 Er, well, maybe not that, precisely. It looked a lot better before my phone’s camera mauled it, I swear. It was nice to go out for sushi; my finances of late have made it an unaffordable luxury. That fit the holiday, too. What could be more American than spending beyond your means? When you live in a city where it’s usually too foggy in the summer to see fireworks (and too chilly for cookouts), nothing says “July 4th” like sushi.

Or as I like to call it, Freedom Fish.