Ain’t no gettin’ offa this train we– oh 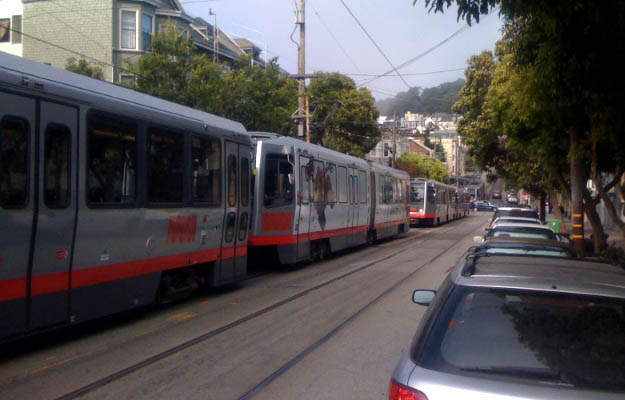 I was all fired up to write something irritable about how terrible public transit is in San Francisco — San Francisco, of all places! The hippiest metropolis in the world. This five-train clog at the tunnel made me walk all the way home up and down frickin’ Parnassus Street, so named apparently because by the time you reach the top you feel like you’re about to commune with the gods forever. But then it turned out the traffic jam had to do with a dead guy sprawled across the tracks, which had an interesting alchemic effect: It instantly transmuted my irritation to unease. This is pretty much the opposite of the kind of neighborhood where you expect to see corpses in the middle of the street. I guess living among a 90% population of retired Chinese immigrants is less safe than previously assumed.

In less alarming news, today’s Retronauts didn’t happen due to the fact that I couldn’t find enough people without scheduling conflicts to create a full podcast. Next time, double-decker podcast. In the meantime, Ray Barnholt and I are kicking off a 25-day blitz of fun Famicom facts (and opinions… mostly opinions, actually) to celebrate the system’s 25th anniversary. Yes, I will be whoring these out with great delight. You can click the image above to see this delightful whoring in action.

Edit: Apparently I didn’t actually see a dead body on the tracks. The police shut down the train route because someone found a live mortar shell in their apartment. I… don’t think that’s an improvement.