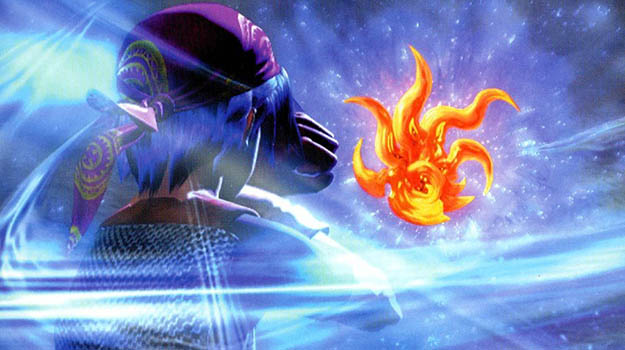 I’ve been listening to Chrono Cross soundtrack for the first time in… ooh, years. It showed up randomly on my iPod playlist and I didn’t bother to fast-forward through it, and wow. That image above? Pretend I’m Serge and the Frozen Flame is the soundtrack. I am trying to grasp its power, but it is blowing me away. And then turning my dad into a power-thirsty furry for no clearly-explained reason.

Part of what makes it so good, I suspect, is the headphones I’m using. I picked up a pair of AudioTechnicas while I was in Japan as an inexpensive replacement for the chunky Sennheisers I’d been using for the past year. The latter sounded pretty nice and did a remarkable job of blocking out, well, everything while I was commuting, but their charmingly ugly retro look also made them uncomfortable to wear and carry. The ATs sounded just as good at the SoftMap display, albeit a bit less bass-responsive, and they were nicely compact and collapsible. So I grabbed them and, two months later, have finally broken in the sound elements.

They’re still less bass-friendly than the Sennheisers, which is to say too much bass causes them to distort horribly. I have to set the iPod’s EQ to “Normal,” because anything that boosts the lower frequencies at all results in agonizing agony. This, it turns out, isn’t actually a bad thing. I kinda miss the fat bottom girls end, but there’s merit in listening to music the way it was actually recorded. Also, the ATs do an incredible job of separating individual sounds, so each instrument sounds wonderfully clear. Admittedly not as nice as the high-end open-ear Sennheisers I use for my console setup, but for a pair of inexpensive, closed-ear, portable headphones they’re pretty fantastic. I figure if each individual pluck of an acoustic guitar’s strings makes my ears vibrate sympathetically, I’m doing OK.

Also: The Wii Fit news analysis piece I wrote for the new EGM has appeared magically online. This is one of those rare pieces I feel came out exactly the way I had hoped, and it features Shigeru Miyamoto confirming many of my personal biases about the nature of “non-games,” so I exhort everyone to give it a read.