Dennis Rodman’s excellent gun-running adventure (aka Eye Have You)

Ah, compulsory trips to weddings. Is there anything better in the whole world? Right now I’m staying at my girlfriend’s best friend’s sister’s house, somewhere in the suburban McMansion fields a few miles from Dulles International. My presence appears to have inspired the eviction of a five-year-old girl from her room so I can sleep in her bed. It’s very small, and surrounded by rather lurid shades of pink on all sides. On the whole, I’d rather be at the office.

Speaking of which, the latest Metal Gear Solid 4 thing I’ve done over at that one other site I sometimes write for is a detailed preview of the game’s Drebin Shop. No, I don’t know why Kojima named a guy who circumvents weapon security lockouts and owns a soda-guzzling monkey in a mylar diaper after the klutzy detective in the Naked Gun flicks. Probably for the same reason he does everything: He likes movies, wants to make movies, and feels compelled to include a shout-out to every movie he’s ever seen in his games. Fair enough. 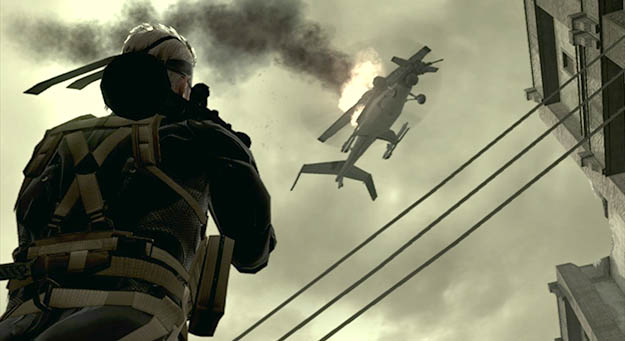 Another satisfied Drebin Shop customer surveys his handiwork.
The preview is, of course, about 25% “load of crap” by weight. Chee, will the Drebin Shop spoil the gameplay by making things too easy? Or will it work out to be OK? I wonder! But please do not let the man behind the curtain spoil your morning.