Notes from the edge (of the New Yorker Hotel) 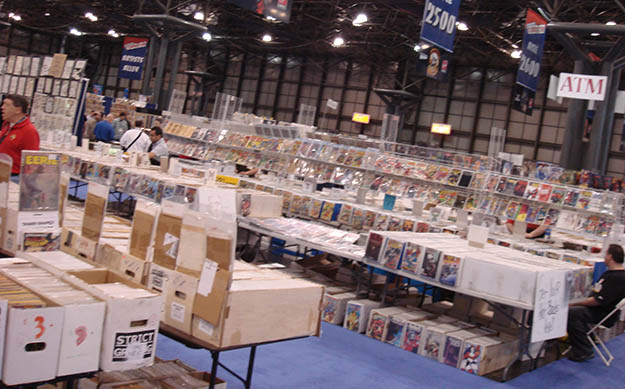 I didn’t mention it in my 1UP blog entry today, but the scene above was the best part of NY Comic-Con. Well, second best — the best was stumbling into a few people I’ve wanted to meet for years, including former EGM’er Shawn Smith (of Shawnimals fame) and Lindsay Cibos. It seems the latter has forgiven me for saying that Working Designs was acting out of necessity for quashing her softcore Lunar nudie artwork, so that was good. (It was very nice softcore Lunar nudie artwork! But a company is legally obligated to protect its trademarks and copyrights or they lose ’em, is all.) Anyway, both are good humans who are working on things they love (Shawn on whimsical plush toys, Lindsay on manga-style graphic novels), so I envy and fully advocate the support of both.

Still, the section pictured above was pretty great, because I totally abused my press early-entrance rights and picked over the dollar bins before the public arrived. I managed to fill in several gaps in the G.I. Joe comics collection I’ve been reconstituting from my days of youth over the past few years, all for less than a sawbuck. Bargain bins are a broke-ass writer’s friend… especially when you’re dealing with issues that usually sell for that much apiece on eBay. 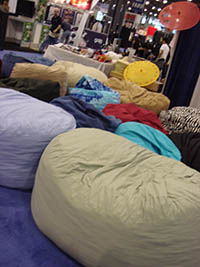 I snapped these beanbag chair photos first thing in the day, during the “industry only” hours when no one was using them. I wish I were still in town Sunday when the show closes, because I bet that would make for a particularly telling (and revolting!) comparison.

Actually, that’s not entirely fair. I’ve been rather impressed by the make-up of Comic-Con. I don’t usually go to shows like this, so my basis for comparison is, say, E3… and this is a very different audience than E3. More women, for one thing — which struck me as odd for a show about comics until I remembered half the publisher booths are focused on manga, which (like armor plating) the ladies love. TokyoPop even has a corner of their booth set up with a frilly tea table and porch swing so you can have your picture taken with a pair of gothic lolitas. The result: a much more fragrant show! Maybe the weekend will bring in the sweaty freaks. 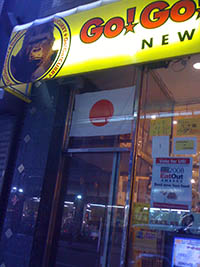 Kohler told me about an authentic Japanese curry chain that’s opened an American branch just off Times Square. By happy coincidence, it was a mere four blocks from my hotel. And I mean the short NY blocks, the ones along an Avenue. Not the epic treks along a Street. I kinda wish it were the Street-length blocks, though, because I could use the exercise. I ordered a small chicken curry and still felt like I’d eaten a pound of delicious death.

(On, uhhh, a totally unrelated note, I’m probably gonna forego food for a week and use my savings to buy Wii Fit.)

Although I guess it can’t be too fattening, since I saw a pair of tiny Korean girls pound down jumbo-sized pork curries in the time it took me to struggle through a small. Right? No? Oh well.

Well, back to business. My second Miyamoto article is online, so bully for that. And hopefully I justified the price of my Comic-Con ticket by writing up Metal Gear Online. (Note: my media pass was free, so I think this is a safe bet.) MGO is pretty great! Monday is gonna be pretty rad, guys. Well, those of you guys in the beta. Also at Konami’s booth was New International Track & Field. As you can probably deduce from my preview, I am somewhat bemused by this game. There’s not much to it, and it’s really ugly… but I still sort of like it.

And finally, in case my assorted blog babble on the subject hasn’t done the trick, I hope my review of The World Ends With You convinces you to give the game a shot. It’s really good! And you will note that I wrote the review more or less as an appeal to people who, like myself, have the impression that it’s a disastrous mess laden with terrible Tetsuya Nomura designs. I mean, it is… but somehow uses those elements to its advantage. It’s unique, original and may actually be the first DS game to justify the Square Enix Tax — it must be a super high capacity cartridge, because it’s packed with tons of exceptional music. Seriously, please support games like this instead of Kingdom Hearts, OK? Please?