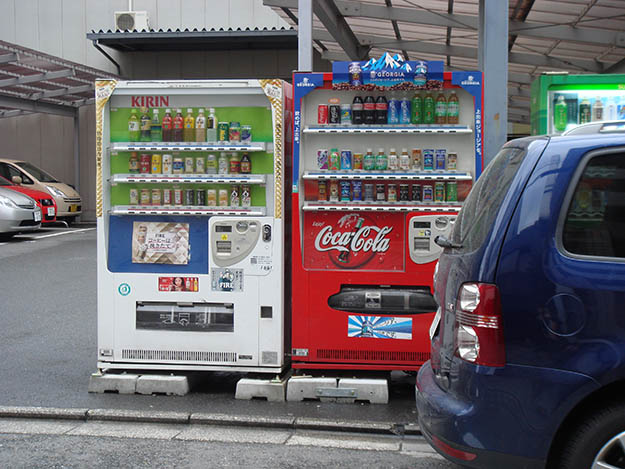 The red vending machine there, tucked away in an obscure back alley of Kyoto, has the distinction of being, so far as I can tell, the only place in Japan where you can buy Diet Coke. Like a colony of red ants being wiped out by their black cousins, Diet Coke has become the victim of a violent pogrom which has seen its place in Japan usurped by the darkly-packaged Coke Zero, which is much too sweet for human consumption. I kinda liked Japanese Diet Coke — like most foreign variants, it never seemed to switch over to Nutrasweet from saccharine, which I honestly prefer. Not simply because it takes less sickly-sweet, but also because I take comfort in knowing the specific toxic properties of my carcinogens.

Anyway, I was gonna pour one out on the curbside for O.G. Diet Coke, but that seemed wasteful. So I drank it instead. Even though I’m sure the only reason this machine still had it in stock is because it was so far out of the way that no one ever uses it, and the can in question probably dates back to the Koizumi administration. Or the Clinton administration, even.