Some kind of trouble on the century screen

The weather yesterday was much too rainy for strolling about Kyoto, so we shinkansened our bad selves down to Himeji to visit the castle… which turned out to be a mostly outdoor affair on dirt paths. Yeah, that worked out well.

Back in Kyoto, I realized I need to append my previous statement about it being less high-tech than Tokyo. That’s true for the most part, but there is one exception: the newer portion of Kyoto Station, which is a grand, sweeping, gorgeously-designed architectural feat that is the sort of thing you’d expect a communist regime to install in the midst of poverty to glorify itself. Except that the beautifully-designed rising wings are packed with businesses and manicured public spaces rather than being superfluous monuments to emptiness, and the construction is impeccable. Oh, and it’s not in the midst of poverty. So really, that analogy sucks. The station doesn’t, though. 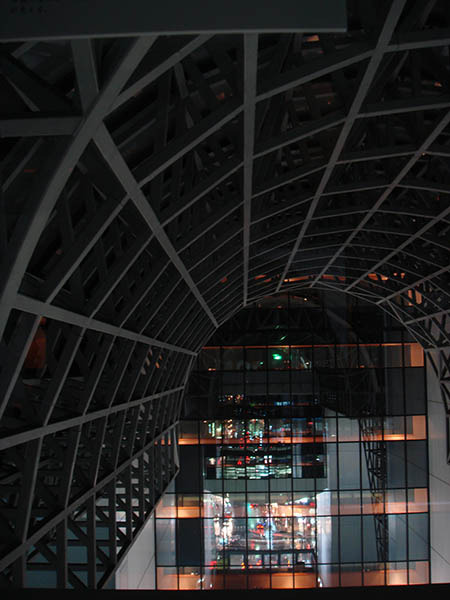 It’s still raining today, so no telling what’s happening. We’re bidding adieu to the ryoukan and toting our bags to a more typical hotel, which is somewhat disappointing, although I will enjoy having room to walk around the room. There was some talk of heading to Osaka, so who knows.

I’m definitely liking being outside of Tokyo in any case; it’s been so long since I’ve been anywhere in Japan outside the city that I’d forgotten that not all Japanese are impassive, highly formal, acutely fashionable worker ants. The people around here seem a lot less uptight, just in their mannerisms and language, and they don’t seem to be concerned quite so much with the cutting edge of fashion. You can spot the kids from Tokyo at a glance in Himeji — they’re the ones making the cold, muddy climb to the castle in micro-minis and four-inch heels and delicately-made designer pants that were never designed for such abuse.

5 thoughts on “Some kind of trouble on the century screen”