Yesterday, our group randomly decided to split up and go our own separate ways after lunch, which left me a new situation: alone in Tokyo. Which was awesome. There are few things I enjoy as much as having a few hours to myself in a large, mostly unfamiliar city. A pair of headphones, a juiced-up subway pass and a rough idea of where I want to go — few things in life are better for a social misanthrope. I can be around people, but don’t have to interact with anyone. And I get a feel for a new place as a bonus. 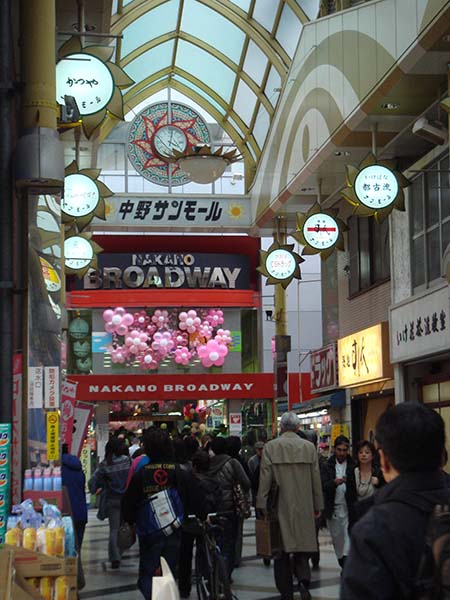 So, I headed to Nakano to buy myself a birthday gift at the secret awesome inexpensive retro game shop Kohler showed me last time we were here. (Speaking of which — thanks, mom and dad! You bought me a copy of Harmful Park. This probably means nothing to you, but I’m pleased… especially since I found it for about 2/3 of what it cost last time I saw it in Akihabara.)

However, unlike Kohler, I decided to take the public Tokyo Metro instead of the privately-owned JR lines — for some reason, everyone I know and work with is seriously averse to using the Metro. I’m not really sure why, though. The trains are just as nice as the JR trains, the stations are as convenient, the schedules as frequent and efficient, and the lines are much more direct. Getting to areas like Nakano and Akihabara via JR from our 1UP base of operations in Shibuya requires transfers and planning, but you can reach both without switching trains via Metro. So, this job was a success: I know my way around a bit better.

And now I bid farewell to the Tokyo portion of the trip, where we’ve been traveling to places familiar to me as staging points for ranging further afield. Today we catch the shinkansen and venture into the completely unfamiliar sights of Kyoto (and Osaka and Nara) — a very welcome chance to do entirely new things. As we’ll be staying at a traditional ryokan the next few nights, there’s no guarantee I’ll have Internet access. But while I’m away, know that I love you all.

Except the annoying jerk-asses. I hate you guys.