As you’re reading this, I am probably being flayed alive. I leave this timed post as my final legacy.

My quest to flush my gaming backlog has been somewhat derailed by the game group reorg — now everyone is on the hook for magazine deadlines, and four reviewables fell into my lap at the last moment. But I did manage to squeeze a quick playthrough of Orcs & Elves in. What I really wanted to do was finish up Etrian Odyssey, but I figured I’d go with a game that can be completed in less time than it takes to map a single stratum of the Yggsdrasil Labyrinth. 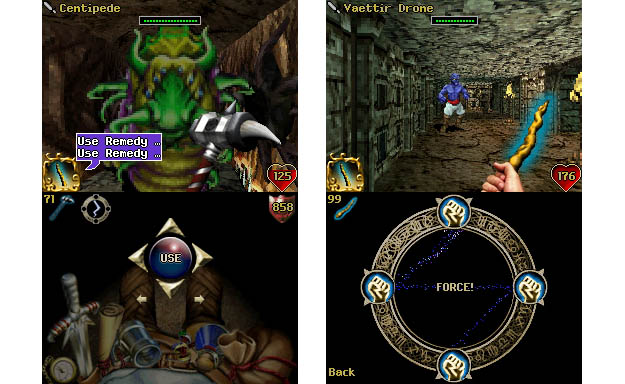 Happily, Orcs & Elves was precisely what I wanted: a lightweight substitute. It’s every bit as old-school as Etrian, but in a very different way. Where Atlus’ RPG is an attempt to recreate the pacing and mechanics of a Wizardry title with pretty modern graphics, Orcs & Elves is a fast-paced streamlining of the genre with graphics that appear to have been plucked from a Macintosh game circa 1991. It’s charmingly ugly, and brings to mind early Bungie games like Pathways Into Darkness — not just for its chunky visuals, but also for its FPS/RPG hybrid gameplay.

Some of this can be excused, as Orcs began life as a mobile game, where the screen is small enough that you can’t tell just how garish the visual design really is. But only excused a little — really, they’re charging full price for this puppy, and apparently coding genius John Carmack programmed the entire engine while he was bored one weekend, so showing a little effort would have been nice.

But, hey, whatever; while the spriting may be a bit eye-gouging, the technology is pretty good. Orcs runs on a really solid 3D engine, showing once again that a quick side project for John Carmack is miles better than many developers can create with a team of several and a few months to muck about. And, thankfully, it keeps the touchscreen silliness to a bare minimum; the bottom screen toggles between a map (auto-generated — sorry, Etrian fanatics) and a goofily symbolic inventory system that, again, looks to have been pulled from an old-school Mac game. The only purpose for which the stylus is absolutely required is casting magic, which has to be done sparingly anyway since a single spell or two is enough to drain away your entire mana pool. A fair trade-off, since magic is insanely powerful. 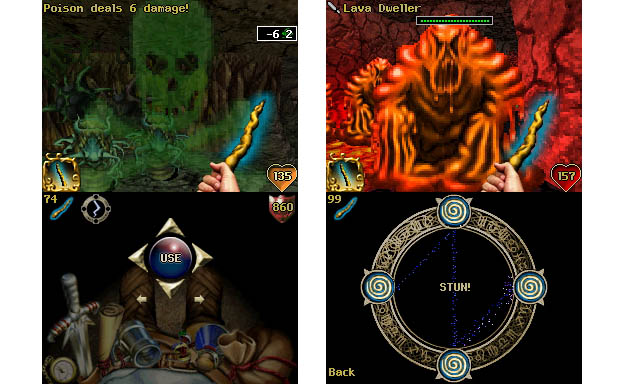 In fact, the default difficulty is really easy. There is, of course, the Nightmare mode, but a quick survey of the Internet saw gamers strategizing to get beyond the first room of the game, so that’s more like “abuse” than “entertainment.” Of course, some people find abuse entertaining. It takes all kinds, really. In this case, I didn’t mind the breezy challenge level, since I just wanted a quick filler between work assignments, and that’s exactly what Orcs offered: five speedy hours of hacking and slashing and, in true Doom style, pressing against the walls to find secrets. (Fortunately, after a while I noticed that you can see seams in the walls where secret rooms appear — a welcome tip of the hat to non-abusive game design. How far we’ve come in 15 years!)

That brevity is probably the game’s biggest sticking point. I didn’t mind it terribly under the circumstances as I had other things to be doing the instant I finished, but $30 for five hours of entertainment is even less of a value than that posh new Sundance movie theatre here in San Francisco where they force you to pay an extra $3 for your ticket during peak times “for our own good.” Admittedly, you can tackle the game at a higher difficulty level, but it’s still the same game; the quest feels awfully short, ending right as it starts to pick up steam. By then I had amassed a decent arsenal of weapons and a hilariously epic stockpile of potions — and just when the truly challenging battles kicked in and I finally needed to start quaffing them, the credits rolled.

Still, Orcs & Elves did what I needed to do: stand in as a lightweight substitute. Etrian Odyssey is a dense, epic novel; Orcs is a three-issue comic book miniseries. But games like that have their place, too — spackle to fill in the gaps.

Hmmm. In retrospect, this is kind of a crappy legacy for me.