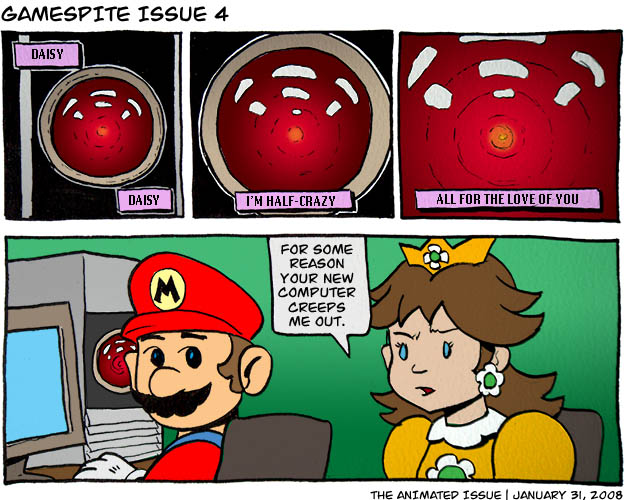 Hey, look! GameSpite’s monthly now. This is, uh, I guess the January issue, then. I was going to post it tomorrow but we’re done already, so, hey. January. This issue is only slightly about video games — the original theme was supposed to be comics and manga. But that slowly mutated over the course of the issue’s development, and I kind of think it would be best to focus mainly on games (given the name of the site), so! Consider this an experiment. And enjoy.

Assassin’s Creed
This began life as a blog post, and it kind of shows! But since we don’t put numbers on scores around here, or in fact have any sort of review standard or format whatsoever, what does it matter? It doesn’t, see. So here you go: repurposed content.

Batman Begins
Speaking of having no set format whatsoever, Kolbe’s review of Batman Begins is mostly a history of the Batman franchise and all the horrible things that have happened through the years to the world’s greatest detective. Which of course is crucial to understanding why Begins is so beloved by, well, anyone who has ever seen rubber Bat-nipples.

Hate
Meanwhile, Bobservo heads to the other end of the popularity spectrum to provide the indie cred no amount of Batman articles ever could with his look at Peter Bagge’s cynically humorous Hate. Well, I gather that it’s cynically humorous, having never read it myself. But now I would like to.

Little Samson
Ilchymis makes his GameSpite debut with a retrospective on one of those late-era NES games that no one ever played because we were all spoiled by Blast Processing and Mode 7: Little Samson. Cute, squatty sprites abound.

Mega Man 5
Cute, squatty sprites also abound in Mega Man 5, but this is one of those NES games that all too many people have played, and undeservingly so if wumpwoast’s review is to be believed. If Mega Man 4 was questionable in places, 5 was where it flew off the rails. I remember renting this back in the day and being terribly sad about a great series’ fall. How little things have changed.

Mushishi
Kirin contributes a two-part look at the Mushishi manga: a general overview of the series, and a field guide to spotting the titular Mushi. You know, in case you’re ever out wandering in the woods of Japan and find yourself besieged by mysterious spirit creatures.

NBA Story (Vol. 5)
Lumber Baron critiques a mid-series volume of NBA Story. Isolating book five might seem a random choice, but really, is it any more random than the series itself — a Japanese manga chronicling real-life stories drawn from the actual NBA? I say “no.”