Pavlovian slaver at the cash till ring of success

So, I’m about seven or eight hours into Assassin’s Creed. So far so good! But then, I’m a sucker for open worlds where I’m at liberty to do pretty much whatever. 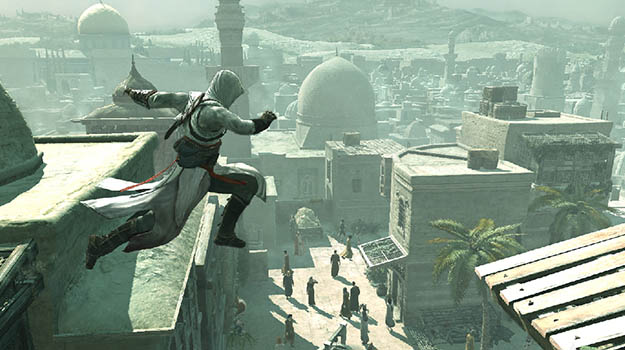 Except that I’m not really free to do whatever, it seems. I’m free to investigate a dude, kill him and also collect flags. And maybe shove beggars out of the way. From what I understand, I’ve seen about all the game has to offer at this point and the rest of the adventure is basically the same thing ad nauseum for another 25 or 30 hours. I will reserve judgment until I’ve seen for myself, though. Still, given what I know, I expect the arc of my experience will be…

Ah well. I suppose if it becomes too tiresome, I can always count on Travis Touchdown to rescue me from a gritty-but-cartoonish American vision of medieval Jerusalem in favor of a ridiculously cartoonish Japanese vision of modern America.

Also of note: This site now host a few other sites. Sharkey’s host went insane (well, more insane) and locked him out of his site, so it can be found here until solidsharkey.com is pointing in the right direction again. And a few site contributors now have their own blogs — Mightyblue has a home for his anime musings and I assume VsRobot will be using his own space to host his Add to Queue podcast. Maybe? And there are a couple of others, but currently their pages consist of (1) a blank index directory and (2) a photo of a bunny, respectively. I’m going to assume that these are merely placeholders and not avant-garde performance art pieces and refrain from providing links until they’re ready.