I’m still working through Half-Life 2, although I have no idea why anymore. I have this constant sensation that the developers kept saying, “Hey, this part is starting to feel pretty fun. We’d better add something stupid and annoying to balance that out.” People talk about “balanced” games, but I don’t think that’s what they mean.

But maybe I should talk about a game I enjoy with barely any reservations to speak of, instead. 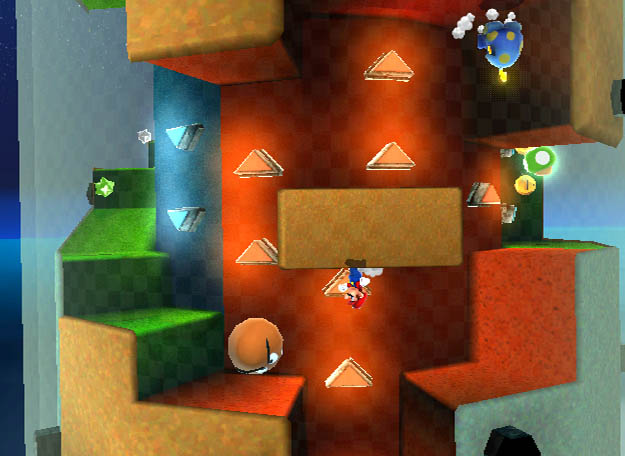 If Super Mario Galaxy were music, it would be a song by that one band you used to love — you know, the one that pretty much defined your tastes when you were growing up, whose every new release was a revelation that made you say, yeah, this is what music is about. But that band changed as the years went by. Maybe they decided to soften up and go the adult contemporary route, catering to the safe security of soccer moms and afternoon radio. Or maybe they simple settled for rehashing the same material over and over again, offering up competent work without its former bite. Or maybe they just settled for remastering and rereleasing their back catalog titles over and over again.

But then that band releases this one song, this single masterpiece, and suddenly you’re reminded of why you loved them so much — why you were so passionate about their music in the first place. For a few minutes, it’s all there: the old creative spark, the virtuosic sensation that this is what music is about. And while you’re happy, you can’t help but feel a sort of bittersweet regret. Because you know that this song is the exception, now, not the rule.

Still, though. What a great song. 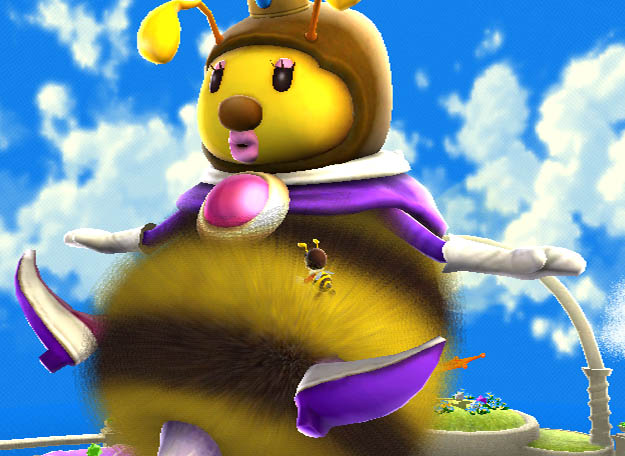 Super Mario Galaxy is a game that has become unstuck in time — it is, seemingly, a relic of a very different era. One where running and jumping and simple, cartoonish play mechanics and aesthetics were what sold. One where Nintendo saw the Mario brand as the perfect receptacle for its innovative, forward-thinking concepts rather than by-the-numbers spin-offs. One where a game could feel at once wholly fresh and comfortably familiar. Mario Galaxy is too straightforward, too earnest for this world… but the world a better place for its having existed, albeit in a tiny, insignificant way.

It’s a game that begs many questions. For instance, how did they get the bumblebee so fluffy? No, wait, I mean… how is it possible to recapture the spirit of the classic Mario games, all the way down to the way the classic Mario games were so frequently inventive and unpredictable? Isn’t there something inherently self-contradictory about creating something so rooted in tradition yet so new? 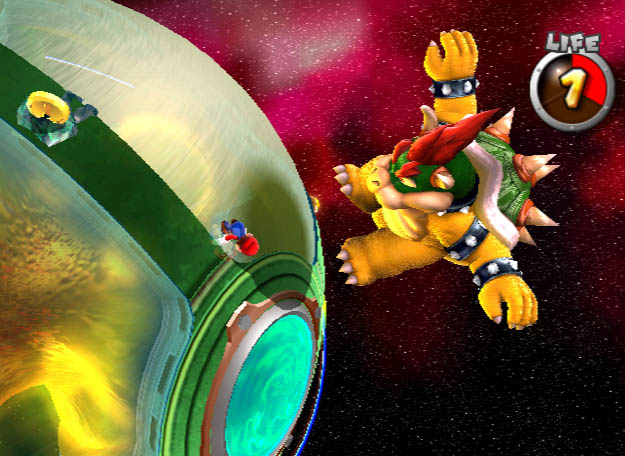 If there is, Nintendo never got the memo. Super Mario Galaxy is quintessentially a Mario game, building on the definitive-but-dated gameplay of Super Mario 64 in the same way that Super Mario Bros. 3 built on the original Super Mario Bros. The fundaments are accounted for — in fact, the fundaments are largely unchanged, 11 years later. Mario’s move set doesn’t really feature anything wildly new or different. If anything, his abilities have been pared down from 2002’s Super Mario Sunshine. No jetpack, no water cannon. His punches are now effectively automated, a skill performed contextually when near a helpless foe rather than the rather un-Mario-like three-mash combo from 64. His one new ability is a spin attack… which is basically a more useful version of a technique picked up Super Mario World.

But Galaxy is smoother than 64 or Sunshine; the camera moves more intuitively, Mario himself moves more fluidly, and some of the basic issues of 3D platforming are quietly negated by subtle tweaks which minimize the frustration that defined the latter portions of his N64 debut. The game is considerably easier to play than its predecessors — not in a dumbed-down challenge sense, though, but rather in the sense that Mario always seems to do exactly what you want him to do. You may need to pay attention to what you’re doing in certain tricky situations, but the guesswork and trial-and-error have been purged from the gameplay. This Mario represents the work of people who really and truly understand how gameplay with a two-dimensional origin should work when thrust onto an extra axis. 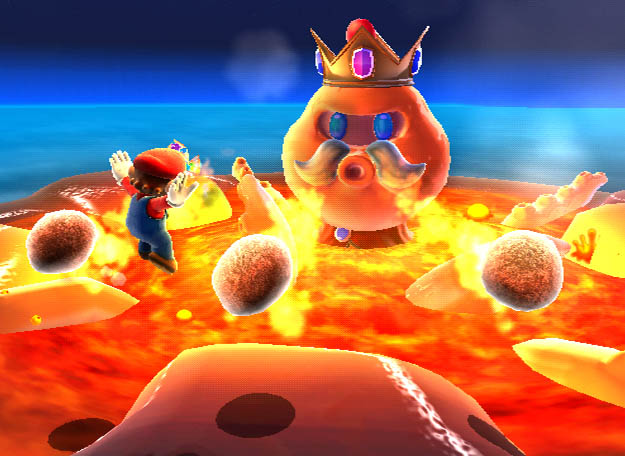 The pure simplicity of moving Mario about freed Nintendo’s design slaves to making the world around him interesting. Galaxy has probably inspired more people to hate Sunshine than it really should have, but the newfound, revisionist disdain for the series’ previous entry comes down to this single core axiom. In Sunshine, Mario could do interesting things in dull places; in Galaxy, Mario can do fairly conservative things in increasingly interesting places. Sure, the action throws him a few curveballs here and there — high-speed underwater maneuvers via turtle shell, odd and sometimes impractical power-ups — but the joy of this adventure comes in seeing what unexpected things each new level will do. This ultimately includes (but is not limited to) flight, reversed gravity, 2D platforming, Mario 3-style airships and some of the best boss encounters to grace a Nintendo game in ages. Mario’s methods of negotiating these ever-shifting hazards never really changes throughout the course of the game, so you can spend more time appreciating the brilliant environs you’re attempting to conquer.

Ultimately, the content of the game is almost a moot point in this “favorites of 2007” listing. Galaxy’s true appeal is that it simply works. Despite the complexity of the worlds Mario explores, despite the game’s gleeful tendency to literally turn your expectations for a 3D platformer on their head, Galaxy is always intuitive, a pick-up-and-play experience for anyone. That makes it unique among the year’s big-name titles, and worthy of retrospective praise regardless of its actual content. But the fact that you’re picking up and playing through such engrossing, inventive and often deviously challenging worlds… well, that’s what makes it a Mario game in the truest sense.

And it even manages to integrate motion controls in a remarkably un-irritating manner. Truly, a thing of wonder.