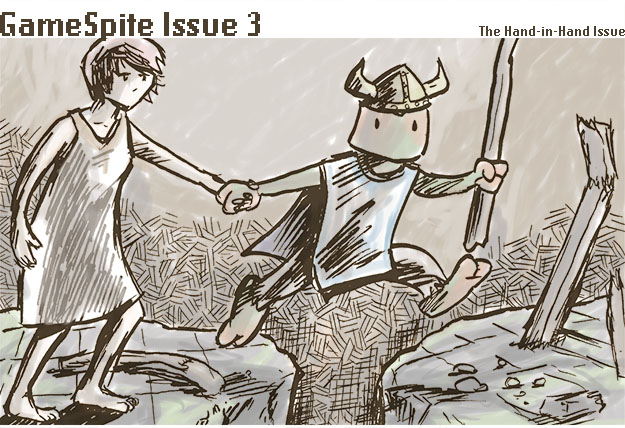 The third rollicking installment of the GameSpite too-digital-to-be-a-fanzine concern is now online. Unlike last time, where we crammed Final Fantasy down your throat until Moogles were spilling out of your ears, this update has only the general concept of “video games” as its connective ligament. Mmm, stringy.

Breath of Fire III
Mightyblue returns to the Breath of Fire series to look at its third installment. His perspective is quite a bit more positive than mine; BoF3 was the first blow in the three-punch knockout that made me realize that I don’t actually have to finish a boring game, because the payoff for 70 hours of tedium can never outweigh said 70 hours.

Breath of Fire IV
And also, a look at the fourth Breath of Fire as well. I learned my lesson from the third game and skipped over this one, but Mightyblue makes it sound… not so bad, if not necessarily great. Oh well. The good news is that this means he has saved the best (Dragon Quarter) for last.

CryptoSafari Snap! The Skyfish
Brandon provides a second installment in his fever dream-like CryptoSafari Snap! series. Last time he hunted down a killed a Tsuchinoko; today, he goes all stabby style on the Skyfish. No, this has nothing to do with bizarre meteorological conditions caused by fish eggs being drawn into the sky through evaporation.

Gunstar Heroes
LeGeek makes his GameSpite debut with a look at an intricate, hardcore exercise in pushing the Genesis to its limits. (No, not Shaq-Fu.) Fun fact: I have been branded a Treasure hater because I don’t love their games without reservation. This is because nerds don’t deal well with contrary opinions.

Ico
For Ico, LumberBaron provides us with a suitably high-falutin’ retrospective. At this point it probably would have been edgier and more unpredictable to have reviewed the game in a dry, formal, standard review template. A missed opportunity! I guess I have to turn in my Meta badge, now.

Kid Icarus
Contributor Red Hedgehog examines the terrible dichotomy of Nintendo’s Kid Icarus: why do some revile it, while others regard it as the bee’s ever-lovin’ knees? The answer lies within.

The Legend of Zelda: Majora’s Mask
And bobservo offers up Majora’s Mask as an already-existing cure for the sensation of “been-there-done-that” which seems to have seized the Zelda series in its soporific clutches. Seriously, if the next Zelda doesn’t do something new I’m not even going to bother playing it.

MacVenture on NES: Uninvited
Meanwhile, Red Hedgehog’s retrospective on Kemco-Seika’s NES MacVenture trilogy comes to its conclusion with an analysis of the third entry in this loosely-affiliated series, Uninvited. That’s “Uninvited,” mind you, not The Uninvited. The box art scared away the article.

U.N. Squadron
Finally, a retrospective on Super NES shooter U.N. Squadron. I had forgotten all the changes made to the home version — it might well be the last vestige of Capcom’s 8-bit-era compulsion to add depth to its arcade conversions by introducing new gameplay mechanics. (Giving Guy his own version of Final Fight does not count.)

Disappointingly, I didn’t have time to write up the Mass Effect review I had hoped to include in this issue. But you’re probably sick of me talking about it anyway.