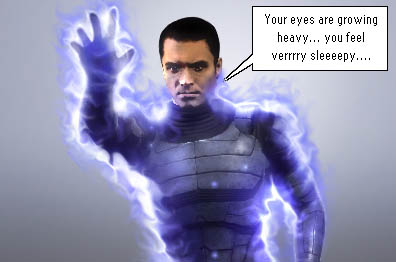 I’m sad to say that the combination of an interesting game and Xbox Achievements is leading me to compromise my better judgment. Yes, I’m going for Mass Effect‘s sapphic romance subplot, despite the fact that I want to kick the Internet in the teeth when it collectively drools about it. But I want those romance Achievement points, consarnit, and since I rolled a female Shepard my only other option is the stupid Biotic dude. Who’s, like, the most boring character in the history of everything.