The rest of the Internet is free to argue itself sick over my Mario Galaxy review, which is probably enjoying a little too much attention as it’s bizarrely the only review currently available from a major site, so far as I can tell. Personally, I’m happier with that article than with anything else I’ve written this year, so all the petty snipery the Internet has to offer can’t prevent me from taking satisfaction in having drafted an acceptably eloquent evaluation of an exceptional game. Besides, I’d much rather focus my energy on appreciating a little thing I like to call “The reason they invented American money.” Which in other circles is known as…. 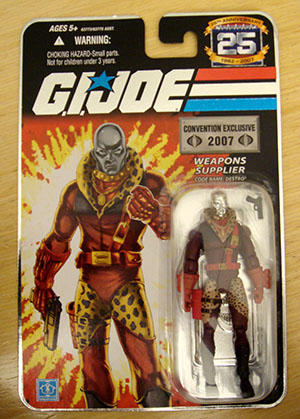 If bizarre obsessions with the numbers on videogame reviews is one of the more obnoxious failings of Internet culture, Pimp Daddy Destro is one of its more notable (albeit useless) triumphs. The story goes like this:

Many years ago, Hasbro designed a really garish version of villainous G.I. Joe mainstay Destro and actually went so far as to manufacture and ship a few hundred of them before coming to their senses and realizing, “This is a horrible idea.” And it was! Just look at it. Thus was “Destro” upgraded to “destroyed.” But, the Internet being what it is, this misbegotten toy has become a thing of folklore among a small Internet circle of fans, celebrated in verse and interpretive dance. So Hasbro inexplicably decided that the best way to celebrate their toy line’s quarter-century anniversary was not to focus on something that most fans would recognize from, say, the cartoon or movie or comic book. No! Rather, the company has chosen to recreate the Pimp Daddy Destro toy. It is a gloriously stupid decision and a marvelously garish piece of plastic.

I’m keeping mine in the package, but only until I can find a feathered hat and cane in the proper scale.