I guess I have nothing to fear from BioShock after all. Andrew’s review — in addition to being beautifully written — basically says, “No, you tool, this game is everything you expected.” Consider me encouraged, and chastened, all at once. Happily, the fallout from my doubts has been a collection of almost entirely cordial responses — even at 1UP, where blog comments have a tendency to drift into “frothy spew” territory at a moment’s notice. I guess BioShock brings out the best in everyone. We should rename it “Yuletime in August.”

Really though, I’m surprised that no one called me a hypocrite for being such a cranky jerk about the BioShock demo after freaking out in joy at the Metal Gear Solid 4 gameplay demo — which, it should be said, looks to compromise its narrative consistency far more than BioShock could ever dream. How terribly biased of me.

So why am I discontent when I’m slightly shepherded in one game yet totally cool with seeing a dude in a different game produce a giant metal barrel right out of thin air? No, it’s not fanboyism; I’ve never been particularly kind to Metal Gear’s narrative excesses.

Maybe it’s just that when a game’s villain is an improbable fusion of Stan Lee and Señor Wences, anything goes.

But yeah, lately I’ve been playing Metal Gear Solid 3 — shamefully, playing it for the first time ever — so the disparity in my reactions to MGS4 and BioShock was at the front of my mind as I spent two hours last night stalking The End. And I think the difference boils down to a simple word: abstraction.

Yes, it’s that Uncanny Valley thing again. Except it’s not really the Uncanny Valley, as that generally pertains to digital actors (or “synthespians,” if you want to be all Wired Magazine circa 1994 about it), and I’m speaking of things with far wider reach. A gulf of perception, if you will. A game can get away with unrealistic gimmicks by separating itself from reality with layers of abstraction. The more abstract the game, the more improbable it can be. Give a caricature of a character like Mario a feather that allows him to fly and it’s fair game; do likewise for your soldier in Call of Duty 4 and suddenly you’ve completely undermined the game. The more realistic the game, the more jarring every deviation from reality. 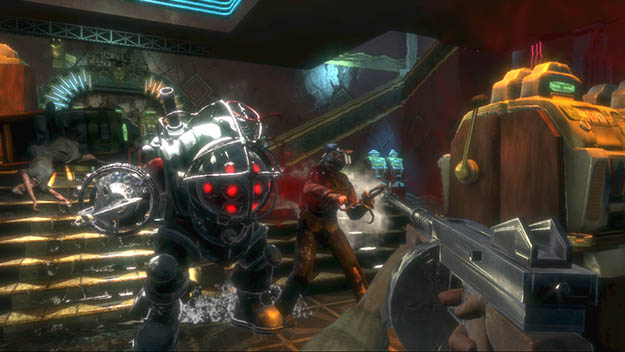 It’s even more noticeable in games using a first-person perspective, because joining the player’s perspective with the on-screen avatar’s removes a layer of abstraction. Thus a dazzlingly authentic-looking FPS like BioShock can unfortunately get away with employing fewer contrivances than a third-person action game like MGS4, because BioShock’s nameless gravel-voiced hero is you whereas MGS4’s hero isn’t; it’s Solid Snake. Of course, BioShock has its dramatic deviations from real life — plasmids, Big Daddies, etc. — but at a fundamental level the game tries to emulate a convincing imitation of reality, or at least a realistically-rendered fantastic situation. Your character moves at a realistic pace, enemies behave unpredictably, light and shadow are rendered beautifully. So when its narrative bends to the necessities of gameplay, the compromises are noticeable for their inconsistency with the game’s general ethos. Meanwhile, when an enemy fails to see a lightly-camouflaged Snake at close range, it may be a bit stupid — but you ultimately accept it, because MGS places game mechanics before narrative integrity. (Which isn’t to say narrative doesn’t occasionally shove gameplay aside in MGS, because it does. Often! But even then, you’ve frozen time to have a lengthy philisophical chat in the thick of a firefight. Not exactly the real world, there.)

It seems fitting when you consider Metal Gear’s legacy, its roots in primitively-rendered 8-bit technology that made heavy use of symbolism. By retaining their predecessors’ symbolic elements, the MGS games use their nature as games to create unique situations — the sniper duel with The End, for instance. I made use of every tool at my disposal to gain the upper hand against him, from binoculars to thermal goggles to flashbangs to sound amplifiers, which is all very brilliant and demonstrates the flexibility of the game’s tools and situations. But a few times, I spotted him not by guile and caution but rather by the ZZZZs rising above his head as he slept. Totally unrealistic, and fairly stupid when you stop to think about it… but wholly in keeping with Metal Gear tradition, where enemies have napped on the job beneath a cloud of ZZZZs since the very beginning. 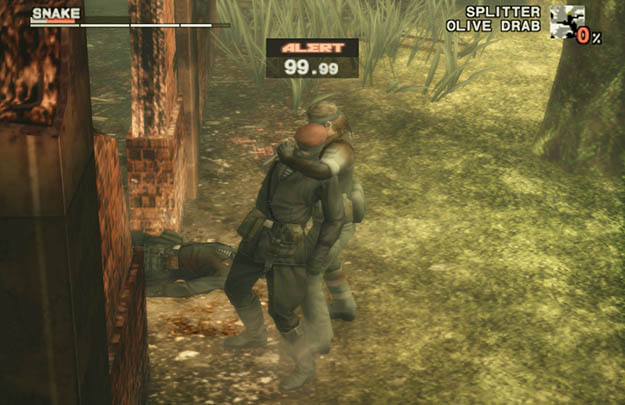 One reason the first Metal Gear Solid holds up so much better than most PlayStation games can be found in its careful balance of realism and abstraction. The characters move in a fairly convincing manner, but the models themselves are almost sketchlike, lacking real facial features. By mimicking the abstraction of Yoji Shinkawa’s art, the developers managed to imbue the characters with a stylized appearance that holds up much better than contemporary games that tried for a more realistic look. The PS1 simply wasn’t up to the task of creating convincingly detailed humans (ignoring for a moment Vagrant Story, which is the exception to so very many rules); by using an art style that worked within the hardware limits, Konami created a unique-looking game that dodged the bullet of obsolescence through abstraction.

Not that this is a particularly novel or important realization. It’s just been on my mind a bit, I guess. And I don’t mean to suggest that games should necessarily uphold abstraction as an ideal. Sometimes it’s integral to the game, but other times it’s just a crutch for insecure or unambitious creators. That BioShock eschews so many conventions and clichés of gaming and still comes off as well as it does — and as well as the reviews suggest — well, it’s an impressive feat. My heart’s all atwitter.

Aaaand that’s why we’ll be starting the BioShock Fun Club Wednesday. I have it on pretty good authority that everyone is champing at the proverbial bit to get started on it. No sense in forcing you poor souls to wait around.