You know that scene in Life, the Universe and Everything where Ford Prefect kills a deer by remaining perfectly still and emitting peaceful pheremones that lure it close enough to let him snap its neck? I learned this weekend that I have that power, too. But only while playing Etrian Odyssey.

My girlfriend and I went up to China Camp State Park so she could take some photos for an assignment, and once my digital camera’s batteries ran out — that berry above is one of the few interesting shots I managed — I retired to the sidelines to start up a new game of Etrian. As twilight decended on the park and the other visitors left, I was making good headway when suddenly I saw an enormous dog out of the corner of my eye. I whipped my head around to get a better glimpse, only to find the “dog” was actually two deer that had come down from the treeline to get a drink from the public dog dish next to the bench where I was sitting. The closest one was about three feet from me and was quite a bit more startled by my presence than I was by its. Well, not too startled… it backed off, but only by a few feet, and only ran away about ten minutes later when some other people walked by.

Considering how completely brutal Etrian can be, I’m surprised that I can be so calm while playing that I actually become one with nature. Clearly I have squandered this gift of unflappable coolheadedness under duress. I shoulda been a sniper.

We also watched a bunch of movies this weekend, in an act of willful self-indulgence. It was Cat’s birthday, so I let her make the film selections. Which meant romantic comedies ahoy! 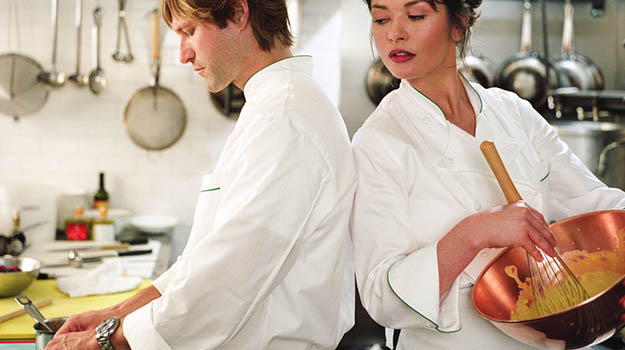 No Reservations: Quite ironically, I had many reservations about this choice. In part because of Catherine Zeta-Jones. I think she’s great, almost inhumanly beautiful and a respectably capable actress, which is why I didn’t want to see this. Nothing worse than seeing a capable actor/actress slum it in a bad romantic comedy. Luckily, Hollywood lied — there was some romance, yeah, and a tiny touch of comedy, but this was actually a much sadder movie than the movie posters would lead you to believe. Tragedy is one of the few things that can redeem a movie of this genre; you beautiful people want the stupid faerie-tale ending, you better cry for it.

Also redeeming: It was largely set in a French restaurant filled with food that looked almost as good as Ratatouille’s. And Abilgail Breslin, who has turned out to be an incredibly talented child actress, had a large role which was pretty much the exact opposite of her part in Little Miss Sunshine.

Falling For Grace: This indie(-ish) movie was pretty much the romantic comedy I was dreading when I saw No Reservations. Harmless yet ineffectual, and really only redeemed because (1) Margaret Cho excels at chewing scenery and (2) much of the movie focused on a very realistic depiction of immigrant life in America without being preachy or overbearing about it. I probably would have liked it a bit more if the projectionist had bothered to focus the image, too.

The Simpsons Movie: Hey, look! I found a picture of Simpsons fans expressing their opinion of the movie.

Not that I can say anything. When we bought tickets for No Reservations, Cat was browsing through a booklet of brief summaries about the movies currently showing and stopped at the Simpsons page. The guy at the counter said, “You don’t need to read about The Simpsons! You know what it’s about. You’ve been watching the previews for 18 years.” I asked him it really kept true to the show’s 18-year run, and if this meant that the first half of the movie was going to be great and the second half would suck. He wasn’t amused… but I was right.

I stopped watching the show years ago, when Homer stopped being a well-meaning doofus and became a mean-spirited bastard, and only went to see the movie because I thought my girlfriend wanted to. (Turns out she was only going because she thought I wanted to. That falls somewhere between “Gift of the Magi” and “Ironic.”) Having gone into the theatre expecting 90 minutes of pure pain, I was pleasantly surprised when it turned out not to be terrible. Sure, it’s largely a repackaging of jokes and situations from when the show was good — wow, Homer experiences a hallucinogenic vision of self-realization? How new! — but I laughed. Which is something the TV show hasn’t made me do in many, many years.

Of course, the first thing we heard after leaving the theatre was some dude on his cell phone, loudly lamenting, “Man, the Simpsons Movie sucked hard.” It was like seeing the Internet in real life.