After many glasses of work

I’ve experienced my very first leak. Internet leak, I mean. The cover story I wrote for the next EGM? It’s out in the wild, and the issue hasn’t even left the printer, yet. The delicious part is that thanks to embargoes and other such nonsense, 1UP can’t actually write about what’s been leaked — and reported at many other sites, pretty much verbatim — until next month.

I would be horribly disillusioned by this, except that I already knew the ancient mechanisms of the gaming press are untenable. Particularly its quaint reliance on getting permission to do pretty much anything from PR people who simply don’t understand the dynamics of the Internet. So no, this doesn’t change anything. I find myself wishing daily that I had the skill and intelligence to anything besides write about video games, and things like this merely add another layer to the delicious cake of ennui that is life.

Nothing to do now but make myself feel better by making fun of Tetsuya Nomura, via what appears to be a screen shot of Final Fantasy XIII. 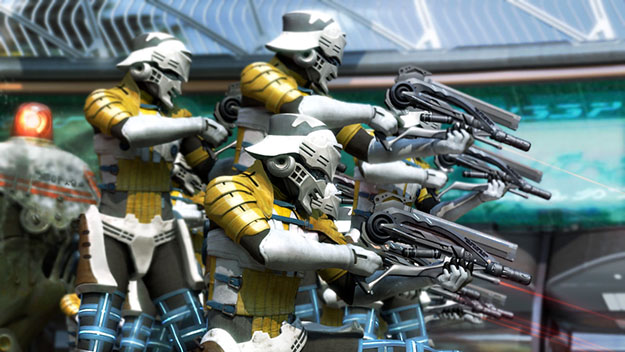 Wait, are those samurai helmets on dudes wearing armor and, uh, man-garters? Made entirely of belts? Glowing belts? Man, my heart’s not even in this. There’s just no challenge anymore.

21 thoughts on “After many glasses of work”