I was gonna post this in my 1UP blog, but since the site no longer works for me — the delightfully inexplicable side effect of a speed-enhancing hardware transition that seems to be working a treat for everyone else — I guess it goes here! We’ll just consider this part three of my Seattle photo blog. Uh, but I guess we need a photo first. 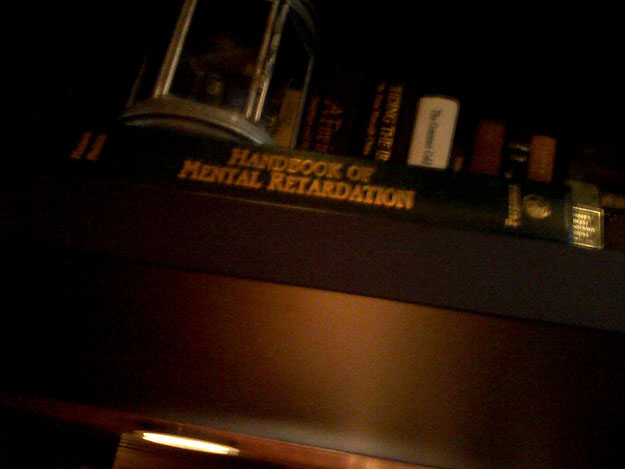 Ah, there we go. As we can see from this book I spotted at the first night’s dinner, Nintendo is studying up for dealing more effectively with the Internet.

Anyway! I have recapped this week’s Nintendo event. At first I was worried I was too, you know, forgiving, too supportive of Nintendo’s new approach. But then some guy got his whiny little fanboy panties twisted in a knot because I made a reference to the “two GameCubes duct-taped together” school of thought, clearly missing the fact that it was a disparaging reference. So maybe I need to borrow that book I spotted.

But yeah, I’m totally down with Nintendo’s new hook. Of course, like everyone at the event this week, I was disappointed not to see Mario Galaxy or whatever, but apparently I was one of the few who also didn’t expect to see it. I’ve been aware of the company’s new tactics since the DS launched, so this was basically just a formal declaration of intent for what they’ve been doing for years now. And while it does seem something of a waste to fly up to Seattle just to look at Brain Age, there’s enormous significance to what was shown — just not in the usual OMG OMG SO AWESOME EAT THAT 360 AND PS3 sense that serves as the metric for most gamers.

Video games to date have been a depressingly limited medium, jealously lorded over by a narrow-minded and insular bunch of consumers. Which is precisely why there was such negativity in the air this week — the enthusiast press, like the gamers it caters to, is conditioned to expect certain things, and the likes of Carnival Games and Boogie fall waaaaay off the mark. Some of us were able to grudgingly accept the new face of Nintendo, others not so much… and I worry for the latter camp, because they need to come to grips with it. There’s more of a future in Brain Age than in Mario. Look at how many of Nintendo’s games are being presented in simple, elegant and mascot-free packaging; the new target audience doesn’t need a fuzzy mammal or angry space marine to enjoy a game. They just want, you know, a simple, accessible good time.

There’s nothing more pathetic than message board rats who mope about the evil of “non-games” and how Nintendo is ruining video games (ruining, I say!) by daring not to push graphical boundaries and further refine the WWII first-person shooter genre or whatever. And then to see the same people turn around and lambaste opportunistic politicians who decry the violence of video games.

Time for some advanced taxonomic reasoning.

The same casual games that some gamers hate so much are a major part of the solution to the violence in games debate. You’re never going to convince people that violent games aren’t violent — but if you let the medium expand to encompass a wider variety of games, including games that appeal to the critics themselves, then the controversial content becomes a tiny subset of a much larger and more inclusive medium. There’s more to the motion picture industry than summer blockbusters; there’s more to print than Tom Clancy potboilers; there’s more to music than what’s on the radio. Games need to expand like that as well, or they’ll founder into irrelevance.

So just suck it up, forum rats. Nintendo’s not replacing you. You still get your Marios and Zeldas and Metroids this year, your Halo sequels and your dozens of Final Fantasy-branded games and your freedom to pretend to be a scantily-clad level 70 lady elf. By opening the medium to a broader audience, by transforming casual games from niche PC-based time-wasters into a major business element for the world’s largest gaming company, Nintendo’s subsidizing the blockbusters you love so much, introducing new people to the hobbby, and making the industry in general healthier. Please let me know how that is bad! (Preferably with many cusses.) Personally, I’m not seeing it.

Alright then. Other orders of business: One, the new Retronauts is up. The topic is Starcraft. I say practically nothing. It is probably the best Retronauts to date. Ergo, we may deduce that my participation is to the podcast’s detriment. And two, I will try and restore the forums over the weekend. I can’t even begin to describe what a moron I am, but I seriously screwed the whole thing up. Soooo, back to the drawing board. Thank you, PHPBB, for your amazing UI design.