So you may have noticed that the site has been pretty unreliable lately, which is pretty frustrating given that I’m using Dreamhost and they offer about 4TB a month for data transfer. I am using roughly 0.5% of that in a given month, so their server should be able to keep up. But yesterday was sort of the last straw….

The 9 a.m. jump there is where the Joystiq link happened. The dramatic spikes downward are where the server vomited all over itself. That’s, what, five outages? Hoorah for losing half a day’s traffic at the worst possible time! Anyway, I griped a bit and they were nice enough to put me on a new server, which seems all robust and solid and stuff. So that’s good. Please let me know if you see more of those dreaded 500 errors. I want to believe… that they are gone.

Meanwhile, the box art for Dragon Quest Swords has been released into the wild, and at least I understand what the game is about. Clearly, it is about Akira Toriyama diversifying his art style by drawing characters who appear to have escaped from other games: 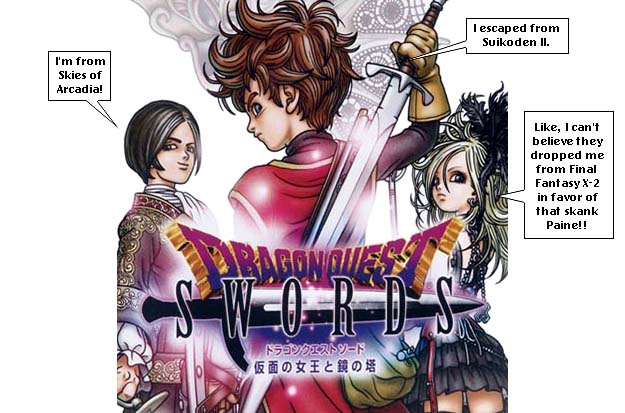