That latest pair of previews I’ve cobbled together for 1UP proves that while everything old is new again, the reverse is also true. 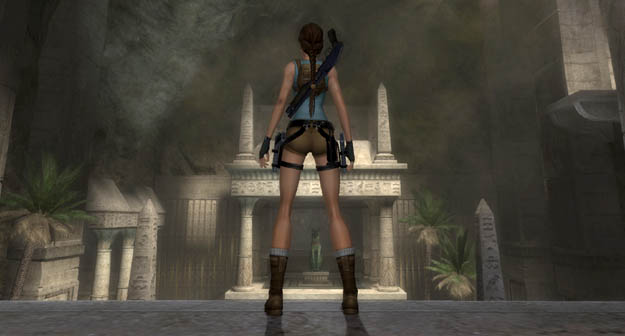 Tomb Raider Anniversary is way better than I had expected — it’s no callow bit of shovelware but a total retrofitting of the best game in the series that keeps all the good stuff while bringing it up to current standards. You know how Metal Gear Solid: The Twin Snakes tried doing the same thing but ended up being horribly broken because they just used levels designed for a more simplistic skill set? Anniversary’s levels are completely retooled so that Lara’s newfound ability to move without being constrained by a grid doesn’t let you simply breeze past entire chunks of the game. And it looks nice! So thumbs up all around.

Meanwhile, Etrian Odyssey is compulsively addictive in the best old-school way, and even includes deliberate throwbacks to old PC RPGs. You have to make your own maps! It’s quite charming. As is the character art. And then you venture into the dungeon proper and promptly have your sad arse handed to you by every new monster you encounter and you realize the charm is all a grim lie to lure you into a false sense of security. But it’s too late because you’ve begun customizing your team and are addicted to the exploration and level-building. I had to beg off reviewing it since the localization was (expertly) crafted by a good friend and former roommate/coworker, which I figure probably counts as a conflict of interest, but if I were reviewing it I would give it a glowing write-up, I’m sure. Glowing through the bruises inflicted by its vicious difficulty.

Also, yesterday’s Retronauts session was the best we’ve ever done… so for the time being I’m not feeling quite so gloomy about the venture’s future. We’ll see if we can sustain this quality. My guess is probably not. This is not pessimism! It is an extrapolation based on prior data.

19 thoughts on “And vice-versa”