Could this woeful tale possibly be the best blog entry of all time? It combines so many things I love: Video games, Marillion, and tracking the arc of Sony’s descent. I’m not sure that it would be possible to spin a tale more capable of warming my heart.

I guess it would have been even better a few months ago when poking fun at Sony seemed more like sport and less like bullying, though. If it makes you feel better, I’m okay with picking on Nintendo, too. I’ve even coined a term to describe their current approach to the console market: “Waggling the dog.” That is, the idea that it’s wacky controller schemes rather than elegance of design that will win the day. 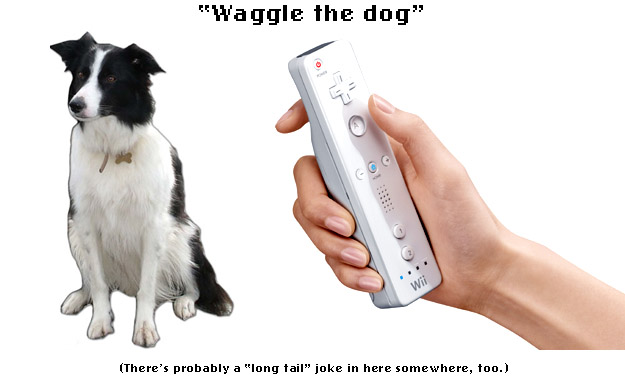 I absolutely believe in the grand ambition behind Wii — expanding the console market by reaching out to new audiences, lowering barriers to interface accessibility, etc. — but Wii game design is really getting sidetracked, hung up on the ridiculous notion that a game’s interface has to be unique. Koji Igarashi has taken a lot of flack for his reluctance to develop for Wii due to his assumption that he’d have to tack motion controls onto Castlevania, but it’s easy to see why he’d make that assumption when everyone else, even Nintendo, is doing the same. Super Paper Mario is a good example: An utterly genius game on so many levels, but was it really necessary to add the controller-shaking? I say thee nay.

Come on, everyone, you sorted it out on DS and no one (except Itagaki, apparently) has a problem with not forcing ill-conceived stylus controls into a game. Let’s see the transitive property of common sense in action, here.

Buuuuut anyway, the moral of this story is that I spend more time playing 360 than Wii and PS3 combined these days, which is vaguely alarming to me on some deep, fundamental level. And also you should buy Marillion’s new album when it comes out later this month. No, shut up, they’re really good. Come to think of it, those aren’t really even morals, just petty demands and useless observations. So never mind all around.

14 thoughts on “Waggle the dog”