So was yesterday the lamest birthday ever or what? My girlfriend left town (she said something about going to meet her sister’s new baby — whatever), and everyone left work early so I wasn’t even able to glom onto other people to do interesting things with. Instead I ended up going home alone and watching very manly movies such as Bullitt and Casino Royale while I backed up the entirety of my on-the-brink-of-failure hard drive. AWESOME.

Bullitt was especially depressing. Once I got past how nice it was to see my favorite city frozen in time and depicted in high-definition (insane film grain and all), there was the crushing realization that 1968 was nearly 40 years ago. Oh, mortality.

So in revenge for the girlfriend’s abandonment of me at such a terrible time, I drew this:

…since she gets sad whenever I draw tragic things happening to ToastyFrog. As suffering is the entire point of the character, this causes no end of heartache around here. Although I guess the joke was on me, as I had to work hard to convince her that this was a brash declaration that there’s only one true ToastyFrog and that no, this wasn’t a twisted, passive break-up message.

Ah well. Seeing as morbidity is the state of this update, have another manga mini-review — this time about a slightly somber and wholly affecting book. 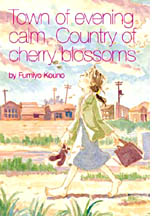 Is there anything more depressing than stories about survivors of nuclear armageddon? Alas Babylon, Grave of the Fireflies, When the Wind Blows — they all present a very clear picture of the fact that the people who die in the flash of ground zero are very, very fortunate. Because the ones who don’t slowly waste away as their bodies fail over time, succumbing bit by bit to radiation poisoning.

Town of Evening Calm starts off as a story in the same vein, following the life of a young Hiroshima survivor named Minami, and how the guilt over the suffering she witnessed but couldn’t prevent — the charred bodies she stepped over as she searched for lost family members, the physical agony of the bomb’s early victims — affects her life ten years later. Eventually, though, Minami succumbs to the inevitable, and the story moves to the present day and takes on a less heartbreaking tone. (Of course, that changes as well once the present-day characters’ connections to Minami become clear.)

The book’s strength lies in its combination of briskness and casualness; at only 100 pages, it’s actually quite short, but the story never feels rushed. At times you sort of wonder where it’s going, in fact, and then suddenly you’re there almost without realizing how it happened. And Kouno’s artwork complements her storytelling perfectly; like the plot, the linework is loose but economical and defines the characters more effectively than you initially realize. Her style is reminiscent of Hayao Miyazaki’s work in Nausicaa, with a similar simplicity and uniformity of stroke and the same unusual lack of screen tone. Come to think of it, didn’t Nausicaa end up getting sick from the God Warrior’s radioactive nature as well? Well then.

Town is a small, quiet tale, but it’s the sort of thing that makes you get all pissed off when someone sniffs disdainfully at the prospect of graphic novels being real literature — there’s a beautiful story here, and it’s artfully told, with all the gravity and emotion of a novel twice its length. Sometimes things just work better without a bunch of clumsy words mucking it up.