Just one last entry for that manga week thing I was doing, even though it was kind of, uh, more than half a month ago. Eh heh, heh. 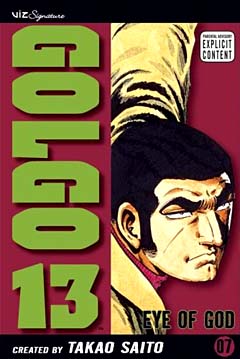 Nothing says vintage manga like Golgo 13! Even the new episodes published in the past year look like they were ripped straight from 1969. You kind of have to wonder what kind of careers the Saito Pro ghost artists could possibly go on to. “Well, for the past five years you’ve drawn Golgo 13 and have perfected imitating Takao Saito’s stiff, dated, macho linework. So I’m not really sure that you’re the right choice for our Yubisaki Milk Tea spin-off.”

But you don’t read Golgo 13 for its modern worldview (it’s very much grounded in ’20s pulp fiction). You don’t read it for its great characterization (the main character is practically a non-character whose personality must be deduced by inference, and every episode features a fresh cast of incidentals). Or for the mystery of its outcome. Golgo 13 always wins the day, even when he kind of maybe shouldn’t.

No, you go into Golgo 13 knowing that someone is going to die, and it’s not going to be Duke Togo. Each episode is 100 pages of T. Saito and his pawns reminding you that their heartless anti-hero is way awesome. “How awesome?” you may occasionally wonder. And they answer, “Totally, totally awesome.” And then someone’s head snaps back, eyes wide with shock, a thin stream of blood marking the trajectory of their skull from where the M-16 bullet impacted.

In this chapter: A crazy but accomplished satellite analyst blackmails President Clinton. Golgo 13 does not care! Then the crazy scientist attempts to blackmail Golgo 13. Suddenly, he cares very much and the analyst freaks out, begging to be taken into protective custody. Because he knows. He knows that Golgo 13 is way awesome, and that his life is forfeit. Then his head snaps back, but his eyes are not wide with shock! That is because Golgo 13 has placed a bullet through them, like the high-velocity jacketed slug rendition of Oedipus Rex. This is because the analyst fancied himself “the eye of God,” and also he was a creepy pervert voyeur. It is heavy-handed, symbolic, moralistic murder at its finest.

The second half of the book takes place 20 years earlier, back when Golgo 13 actually appeared in his own stories for more than a page or two per episode. In a novel twist, he is hired not to kill but rather to nearly kill a woman, just to scare some sense into her. But someone screws things up and kills the lady, framing Golgo 13. I don’t want to spoil the ending or anything, but there’s a pretty good chance the perpetrator dies.

Also: Cromartie High School Vol. 9 arrived. It’s not technically vintage but it definitely fakes an old-school “Crying Freeman” kind of look. Except in a high school setting. Unlike pretty much any other high school manga ever, it does not involve a single fuku-clad girl. At this point Cromartie’s schtick is pretty formulaic, but it’s an amusing formula. So that’s alright.