There is a certain delicious irony in the fact that the first game that has made me happy to own the tragically expensive PlayStation 3 is an $8 download. Based on a free Flash game. (I’m pretty sure that’s irony in the dictionary sense, too, not the fake Alanis Morisette definition.) 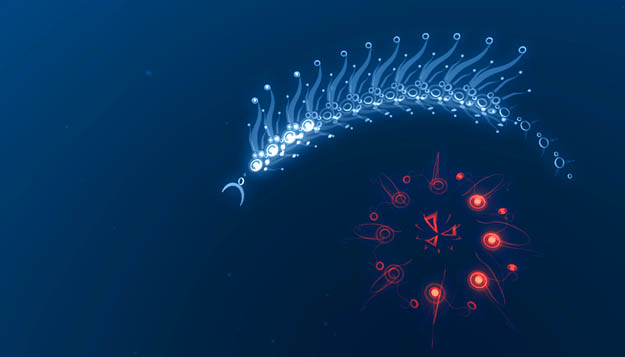 And really, flOw isn’t much of a game — more like a very pretty, very relaxing toy. My girlfriend pegged it: “This is such a game for stoners.” Sharkey calls it training wheels for Spore. I’m sure someone out there was like LOL ELECTROPLANKTON at some point. And all of these disparagements are probably correct! But it’s so lovely and mellow; I approve. And I’m not even a stoner.

But that doesn’t make the curiously sparse and uninviting PS3 library any less of a bitter pill to be swallowed. Sony’s apparent apathy to its new console has been baffling, at least until this morning when I had an epiphany in the shower (no, that’s not as dirty as it sounds) and realized that the PS3 represents the diametric opposite of the PlayStation 2. The PS2 famously used its inexpensive DVD playback capablities as a trojan horse to sneak into many gamers’ home and crush the Dreamcast, and there was suspicion that Sony intended to do precisely the same with Blu-ray. This was widely regarded as a boneheaded idea, since the demand for Blu-ray is substantially lower than interest in DVD had been, and the Blu-ray drive makes the system insanely pricey.

But that’s the difference between the two; Sony doesn’t want to use Blu-ray to leverage sales of PS3, it wants to use the PS3 as a way to inflate the Blu-ray installed base. Which also seems fairly boneheaded, but in a completely different way. This is probably not a major revelation to anyone else, but it’s news to me. Shut up. I’ve been too busy to pay attention lately, alright?