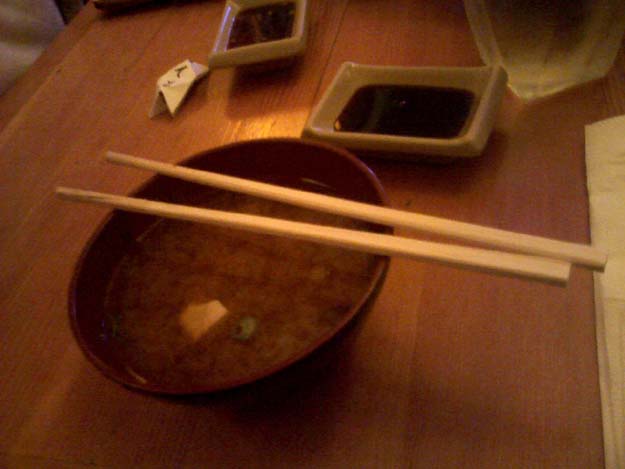 It wasn’t that strange a query. The restaurant in question serves impressively fresh sashimi, but half the time their cups and bowls have a slightly bleachy odor to them. I sniffed my own bowl hesistantly. And yeah, beneath the sweetly salty tang of miso was a hint of soap.

“I don’t understand why their dishes always smell like this,” she complained. “It’s nice to know they’re so clean, but the smell is disgusting.”

“Maybe it’s a language problem,” I offered. “In Japanese, S-O-U-P would be pronounced ‘soap,’ so I can understand the confusion.”

Her silent response suggested she was either amused but pretending not to be or else she simply wasn’t amused. I chose to believe the former.

“Or,” I added, “it could have been the ambiguity of Ls and Rs in Japanese. Maybe the recipe called for ‘rye’ but they added ‘lye’ instead.”

She shook her head. “You’ll keep this up all night, won’t you?”

I held my breath and sipped at my soapy soup. “Probably.”

Epilogue: Then we went home and she gave me a copy of Snakes on a Plane as an early Valentine’s gift. Best date ever.

32 thoughts on “Wash your mouth”