I have a terrible confession to make… I bought a couple of Blu-ray movies. I know. I’m weak.

I mean, I have this PS3 that I bought because I know I’ll need it for work, but so far all I’ve done with it is play Final Fantasy XII with uglier graphics than I’d get playing through my PS2. And that’s just stupid. So I decided a few Blu-ray discs would make me feel a little less guilty about jumping the gun on adopting this chunk of hardware. Yeah, the system came with Talladega Nights, but it would be a travesty to christen a new piece of hardware with a Will Ferrell movie. It’s like buying a new top-of-the-line Mac and launching Jared, Butcher of Song on it first thing to celebrate.

Much to my dismay, I was totally and completely impressed by Blu-ray’s visual quality. It wasn’t supposed to be like this! Next-gen formats were supposed to offer a negligible upgrade! I’ve got a progressive-scan DVD player that looks totally great on my TV, so I was supposed to be able to sniff disdainfully and stick with the old media. I even grabbed a copy of Superman II: The Richard Donner Cut to weight the comparison in my favor; after all, how good could a 25-year-old movie reedited with incomplete effects shots and footage possibly look good?

But no. It looks amazing, even downscaled to my TV’s 720p resolution. The detail in every scene is unbelievable, the light in previously dull interior takes on a glowing luminosity, and there’s no more shearing in action sequences. It makes my old DVDs look grainy and washed out. It is, in short, really quite annoying. Fortunately, there’s this whole stupid format battle (thanks, Hollywood) between Blu-ray and HD-DVD that needs to be resolved, so caution tells me not to get too wrapped up in either format until the smoke has cleared and one or both are dead.

Weirdly, I’d sort of like Blu-ray to come out on top, and not simply because I already own a player. I just feel sorry for Sony these days — the company’s ineptitude has become a thing of mythic proportions, culminating in this week’s absolutely embarrassing Emmy debacle, and they really need a win somewhere to boost their self-esteem. They’re certainly not doing too well on the gaming front. Besides, after the grim deaths of Betamax, MiniDisc, UMD and (inevitably) Memory Stick, I figure they deserve a victory just for trying. Blu-ray: The “Most Improved Player” award of the format wars.

In other news, SF MUNI’s new light rail line opens today, which is approximately totally great. This strikes me as a fairly big deal given that (1) it’s delightfully un-American to favor light rail over much cheaper buses and (2) it provides fairly high-quality service to a corner of the city which tends to be given short shrift due to the fact that it’s largely mired in poverty.

Mostly, though, I’m happy because it means the train line I ride every day should adopt a much more predictable service schedule. Sorry, my social consciousness is all a horrible sham. 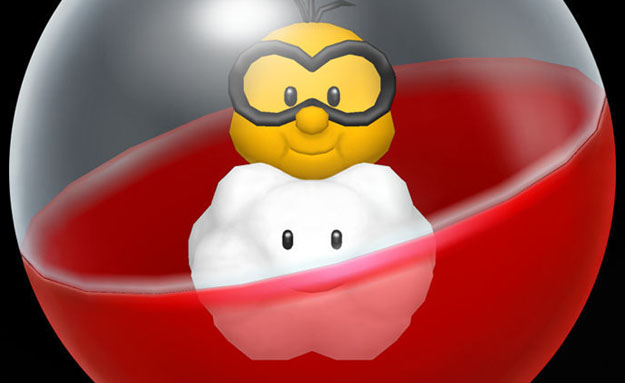 FORUM FUN: Nintendo Super Squad 15 has been belched into existence and confirms pretty much everything we knew to be true about Lakitu. Out of curiosity, do you guys pronounce his name LA-ki-tu or La-KI-tu? I discovered recently that the former seems much prevalent. I’ve always gone with the latter, but I’m pretty sure that’s because Elton John’s “Nikita” was always on the radio when Super Mario Bros. was at its peak of popularity and for some reason I kind of mashed the two together. “Oh Lakitu is it cold/In your little corner of the world?” Yeah, that’s probably more than you needed to know about me.

Also, someone at 1UP’s forums mentioned that IGN took a swipe at EGM this week about fact-checking, which is, all things considered, pretty ironic.

22 thoughts on “My Blu period”