So after dropping a gigantic chunk of change on a 360 and a nice TV to make proper use of it, I’ve not actually had time to enjoy it — I squeezed in a couple hours of Dead Rising on day one before succumbing like a hapless zombie victim to a crush of work-related responsibilities. No matter, I suppose. Even if I had the time for gaming at the moment (unlikely, with PAX coming up soon), there’s the question of whether I’d be able to; my girlfriend has practically claimed the TV as her own. It started innocuously enough, when she co-opted it to watch Project Runway last Wednesday, but it’s only gone downhill from there. In fact, at the moment, she — a woman who never, ever plays videogames, and doesn’t even really like them — has actually done more gaming on my 360 than I have. I’m totally at a loss to explain it.

The most recent twist to this heinous plot: much to my astonishment (nay, bewilderment), she’s decided to master Halo. It’s been interesting, to say the least. For starters, this marks the first time she’s ever played a 3D game. Coincidentally, it’s also the first time I’ve ever experienced motion sickness from a videogame. I’m fine when I’m playing; I’m fine when I watch most other people play. But she made it all the way to the end of Pillar of Autumn before she realized that pressing Up on the left stick moves you in the direction you’ve turned with the right stick, meaning she completed the entire first level by moving at 45 to 90-degree angles from “forward.” It was an amazing feat. Almost as amazing as the fact that I didn’t lose my lunch watching it happen. 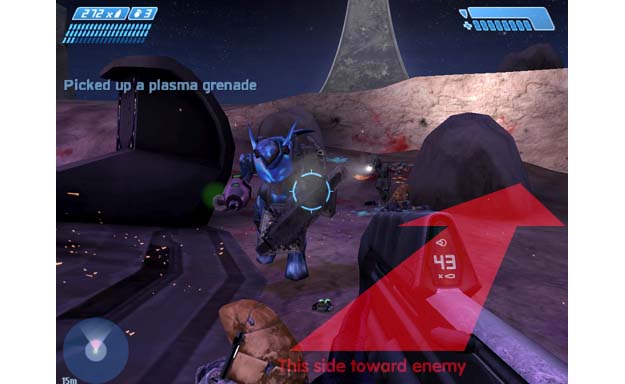 Her next goal, I think, is to learn to make proper use of analog control, which should facilitate her aiming quite a bit. Currently about 95% of any given assault rifle clip ends up in the floor, ceiling or walls rather than in the nearest Elite.

Needless to say, I’m impressed with her determination — she’s made it to level four despite the fact that Halo is not a forgiving or inviting experience for those who aren’t familiar with the conventions of the genre. Anyone who tells you otherwise is a friggin’ liar — or, more likely, has fallen so far into the hobby that they’ve lost touch with reality. (Those guys seem to be everywhere these days.)

I don’t know if she’ll make it to the end, though; while she’s adapting with impressive speed to the complexities of the gameplay, she didn’t want to play Dead Rising because she finds zombies “too intense.” And I haven’t had the heart to tell her about the Flood.

22 thoughts on “The HD (in)experience”