Well, guys, it’s been real, but the ride is over. I now own an Xbox 360, so from here on out all I’ll be talking about is middle-aged white guys with metal (or plasteel, perhaps) body armor and mouths permanently set in a violent sneer. You know the types — the ones whose mothers told them “Your face will get stuck like that if you don’t stop making that expression”… and they took it to heart. These guys have gigantic Liefeld-derived guns which they use to shoot generic Giger-derived aliens and generic Star Wars-derived humanoid soldiers. That is the heart of the 360 experience, my friends. Screw the candy-colored light-hearted crap with accessible gameplay — the future is a dull shade of grey that makes Blade Runner look like Disneyland, with the glossy plastic sheen (even on human flesh) that only woefully-abused lighting and shading effects can offer… in HD. Obnoxiously complex controller configurations? Why, that’s just the cumbersome icing on the ugly-ass cake! 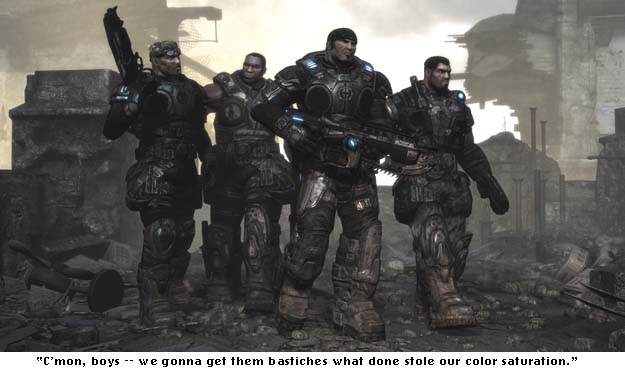 Oh, wait, EGM just handed me a Rocket Slime ROM to review. Never mind! I’ll have to wait to switch my allegiance until after I’ve finished with that. Roll on, candy-colored joy. Roll the heck on.