The rumors were right

I am a slave to Microsoft. And by “slave” I mean “I have finally broken down and purchased a Microsoft-made console.” It’s taken me almost five years to come to this point, but I knew it would happen eventually.

The surprise is what has turned out to be the impetus for this decision: Dead Rising. When Keiji Inafune stood in front of us at Capcom’s 2005 pre-E3 press conference and showed off the company’s first next-gen creation, I had to struggle not to puke. This was particularly difficult coming as it did on the heels of the Final Fight Streetwise trailer. Dead Rising at that point was just a really, really ugly version of State of Emergency — but with zombies! Since “but with zombies!” is roughly as hollow and meaningless a selling point as, say, “but with pirates!” or “but with monkeys!”, this is to say it looked terrible in every possible way.

The game’s come a long way since then. I’ve watched Sharkey spitting gobs of phlegm at the undead with growing envy, read of how shambling rotters can be defeated with Servbot costumes with growing giddiness, and learned how some remnants of the Dragon Quarter team have applied their unique design philosophy to the game with growing eagerness. Much to my amazement, I realized the other day that I actually want this game. So I guess I’ll be playing into Peter Moore’s vile schemes by getting a 360 and Wii this year with the money I might otherwise have spent on a PS3. Looks like that streak of Sony fanboyism was short-lived. (Approximately 23 hours, if the timestamps are to be believed.) 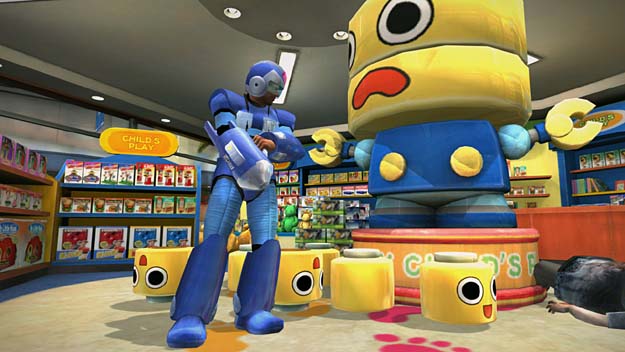 Of course, yeah, the prospect of Symphony of the Night in progressive scan probably factored in there somewhere, too.

Also: to everyone who has ever complained that they’ve gotten a “Spam is not appreciated” message upon trying to leave a comment here, you’ll be glad to know I decided to loosen up my anti-spam measures and deleted a bunch of word filters yesterday. Within hours, I was inundated with the comment spam. I will never take your needs into consideration again.

72 thoughts on “The rumors were right”