I’d always wondered if you could feel an earthquake while riding a bus or train. It turns out the answer is yes; you know you’re experiencing an earthquake when it feels like the train is straining to leap off the tracks.

I’m disappointed yesterday’s little trembler didn’t hit an hour earlier, though; I would have been at the office, where I could have enjoyed our building’s kinetic energy dampening technology. Which is to say, the entire skyscraper sways back and forth until the quake’s force has been dissipated. I like to call it “Mr. Ziff’s Wild Ride” due to its slightly nauseating resemblance to a 25-story Six Flags ride.

I see that the new EGM has started to hit subscribers, which means I can mention a couple of things that have been on my mind about this particular issue. For starters, my Deep Labyrinth score is in error — I meant to type “6.5” at the time but gave it a “7.5” by accident, which I didn’t realize until the printed issue had arrived. This is why I will never again finish writing a review at 2 a.m. and submit it while half-asleep. Anyway, my score was still way higher than anyone else’s, which I expected since not everyone enjoys dungeon hacks with same demented glee as I do, for whatever strange reason. Tsk, some people’s kids. 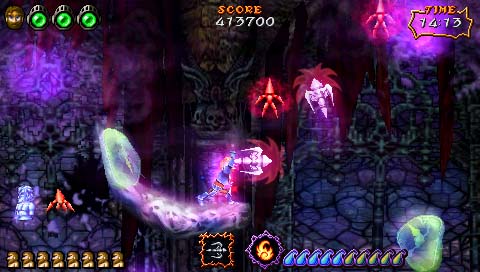 Secondly, the import version of Ultimate Ghosts ‘N’ Goblins has arrived at the office, so I can finally talk about what complete crap it is without breaking any embargoes. Although I guess I should save my juiciest venom for the 1UP review. It is a terrible, terrible game, and the fact that some people have convinced themselves it is a work of art speaks volumes about how powerful the forces of nostalgia and franchising can be. It is not the game everyone was hoping for, except that small demographic that savors physical and psychological trauma. In fact, it is the worst thing to be inflicted upon the Ghosts ‘N’ Goblins legend since the atrocious Game Boy Color port of the NES port of the original arcade game. It is not good in every sense of the phrase.

Had UG’n’G been attached to any other name, people would be throwing it off the rooftops and setting fire to the developers’ hair; but since it’s attached to a series known for its toughness, fans of the series are deluding themselves into believing that its cheap level designs, ugly graphical “style” and completely broken control scheme are positive traits. I’ve even read that Edge gave it a 9, which is unheard of for a lousy game developed outside the UK. Of course, I can’t hold that against them — my finger slipped on the number row recently as well, although admittedly not by five whole keys.

Well, stick to your guns, UG’n’G fans. Maybe if you believe in its quality hard enough a magical fairy godmother will turn you into a hardcore gamer. Meanwhile, I’ll stick to games that don’t completely suck. Like Deep Labyrinth. (I believe the proper sound effect here is zing.)

Edit: The Mega Man ZX reviewable just landed. Capcom gets a little bit of post-UG’n’G grace for taking the voice acting out of the English version. DS cards demonstrably lack the capacity for full vocal tracks, and the thought of listening to badly-acted English dialogue compressed to the point that it sounds like it’s playing over a dying transistor radio was not warming my heart. Silence is so much better.

Also, 100% LOL at the transformation of the Return Of Crystallized Knowledge SYSTEM into the Meta-Encapsulated Granule Awareness System. Much less LOL for the change of Serpent Company into Slither Inc., though — it’s much, much too Harry Potter for its own good.

Edit: I just realized that it’s been three years to the day since 1UP hired me. I feel like I’ve accomplished very little here, but hopefully posts like this will help advance my career of being disliked by people with nothing better to do with their time.

51 thoughts on “Ready to rumble”