I had never heard of Focus Features before watching Lost in Translation, but this weekend I came to an important realization: Focus was created for the express purpose of preventing me from completely hating Hollywood and the film industry in general. More so than Pixar, even. I’ve developed an almost Pavlovian response when the Focus logo appears before a movie trailer: I actually pay attention to the contents of the trailer. And I invariably find myself thinking, “Hey, that looks really good,” when the trailer ends.

Likewise with Focus movies themselves: not only do I not feel slightly less intelligent after watching them as happens with most movies these days — I actually leave the theatre happy. Glad to have spent the ten bucks, even. It’s a miracle of Hollywood.

This weekend’s Focus movie du jour was Scoop, which demonstrated Woody Allen’s latest obsession: Scarlett Johansson having ill-advised relationships with wealthy British men. It was a perfectly enjoyable movie for several reasons, not least of which was the improbable sight of Johansson turning into a younger (and vastly more attractive) mirror of Allen’s neuroses. What really made Scoop so enjoyable, however, was the fact that it’s essentially the alternate reality version of last year’s Match Point. I imagine Scoop came into being as Allen was watching the rough cut of Match Point and starting freaking out in his quietly neurotic way, the realization dawning that oh dear this movie is so dark and serious and not at all like what most people expect from him. So he rewrote the movie as a screwball comedy.

Sorry. I know you guys get confused and feel I’m “off message” if I fail to couch everything in terms of videogames, so let me restate in the visual language of nerds: 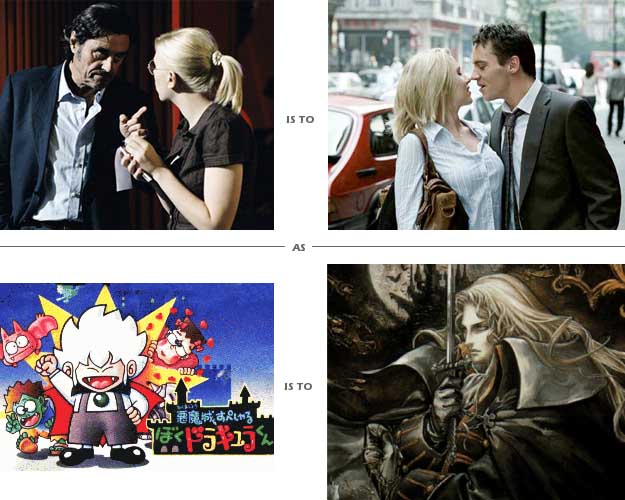