We could be heroes 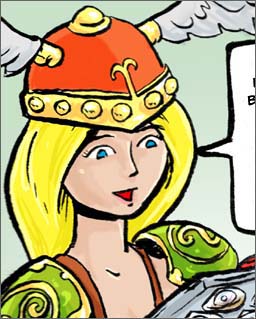 Hey, it looks like my Legend of Heroes II review has finally been posted (after laying dormant for a few weeks because I’m a big dope). I probably spent more time on this particular review than the game really deserved, but it was a matter of necessity — LoH2 is so generic, so utterly competent-yet-unremarkable that I had trouble coming up with 120 words for the EGM cross-review.

Thus, I had no choice but to create a cartoon review to spare myself the excruciating challenge of coming up with another 500 words about it. And even then, I had to embellish it by concocting a slightly creepy reality in which Valkyrie and Reiko Nagase are living in a rather suspect domestic situation. (Sorry the art is subpar, I’m rusty.)

I tried to use a Bandai character in there instead of just two Namco characters (the better to represent the corporation with) but was stymied by the fact that Bandai hasn’t created an original character since “Monster Party.”

11 thoughts on “We could be heroes”