Last week someone or another asked my opinion on some Slate article (which I hadn’t read) that took the world to task for having failed to create “the Lester Bangs of videogames.” I tried to ignore it, but now I can’t, because the topic is cropping up everywhere I look. Jane sagely pointed out the fact that there is no Lester Bangs in any medium now, and I don’t see people berating the New York Times for its lack of hard-hitting “book journalism.” But there’s something even more important that no one seems to have mentioned yet: that videogames are not, in fact, music.

Last I heard, developers don’t go on tour performing their games; Bangs was able to live the rock-n-roll lifestyle in a way that is completely impossible with videogames. There’s a certain mystique to music that comes from its performance-based nature; the creative process of videogames is more akin to the process of recording a studio album, which for most bands is simply the means to an end. In gaming, the product is the end.

More importantly, Bangs made his mark before the total corporatization of the music industry, giving him unprecedented access to musicians and the ability to be confrontational as he saw fit. Once Nintendo took over the games industry, though, developers vanished behind a monolith of PR — and PR types don’t like to play ball with the media even when said media is trying its best to make the game in question look good.

(All-too-typical exchange at the office: “We’d like to do a cover story on ______. Millions of people will see our extensive preview coverage of this game we’ve selected because we’re genuinely enthusiastic about it!” “Positive, high profile coverage? Eh, we’ll get back to you.”)

Come to think of it, even Atari hated to give credit to its creators — thus the mass exodus to Activision back in the day. In short, the people who run the industry are very reluctant to reveal the people behind their products, and Bangs’ work was great because it was as much about the musicians as their work and his feelings on it. Gaming is a more impersonal medium than rock — outside of a few major names, it’s not a personality-driven medium. And even those major names, the Miyamotos and Wrights and whatever, are carefully tucked away behind layers of PR representation by overbearingly protective publishers.

When teenage boys across the country stand in front of their bedroom mirrors and “air code” in time to GTA, when thousands of gamers spontaneously convene in a muddy field in upstate NY to watch their favorite developers program games, gaming will have finally become a cultural incubator to parallel the rock culture that gave birth to Bangs’ work. Until then, though, this is all very silly. Much like the entire concept of “videogame journalism,” in fact. 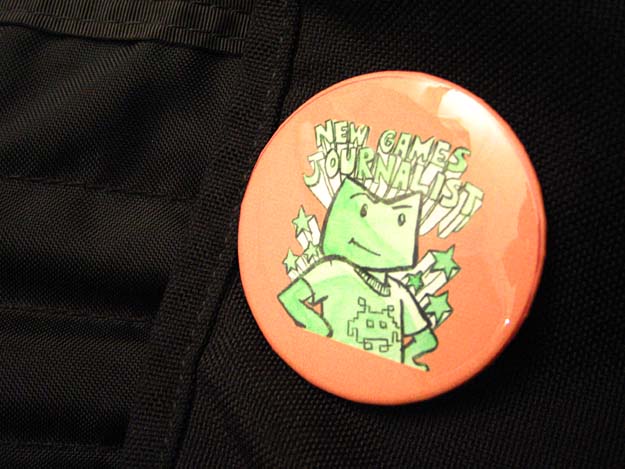 The first batch is being shipped off to serve as prizes for SGE ’06, but I’ll put together a few more designs and offer some sets, since I know a few people were interested.