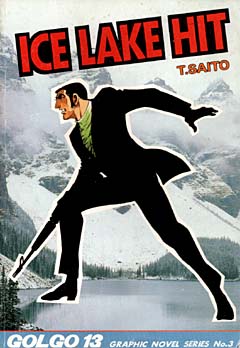 Now that I have the complete collection of G13 in English, I can say Ice Lake Hit is easily the worst. The main story is actually pretty decent, if a bit formulaic; the problem is that the Ice Lake Hit section is actually just half of the book. The second half is really painfully lame. And the art is weirdly stiff and awkward, almost like old Doonesbury or something; the art in Golgo-13 always looks a little formal, but there are some serious issues of perspective and anatomy not usually present in the series. Maybe Saito was making use of the second-string protegés that month.

The story begins with Mr. Togo bagging himself a moose up in the Canadian wilderness. Despite the hunting guide’s protests that the herd has been spooked and he could never possibly take down a skittish moose from half a mile away, Golgo manages to snipe not one but two, and all with a single shot.

For once, his ruthless accuracy works against him, since the hunting limit is one moose per hunter and some very earnest Mounties are patrolling nearby. They decide to arrest Golgo for poaching, despite the fact that his guide swears he fired only a single bullet. Their decision is helped along when Mr. Togo reflexively clocks the patrolman who approaches from behind — his deadly talents working against him a second time in several pages. “Perfect machine” my butt. 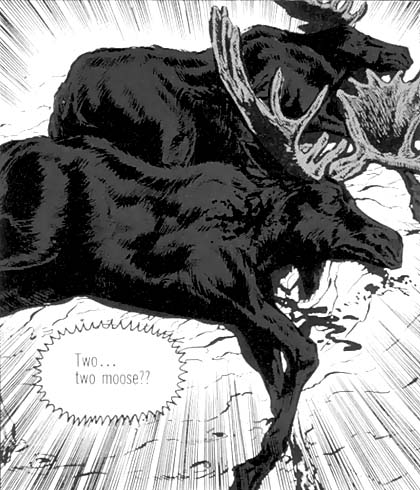 The cops take him in for questioning, although out in the hinterlands their facilities are a bit lacking and his “incarceration” consists of being handcuffed in the next room. The cops aren’t completely stupid and can tell that G-13 is no mere mortal (the specialized hunting rifle and ultra-expensive ammo are clues, along with his steely killer’s eyes), although they do get some Darwin points knocked off for slapping him around.

Seriously, man, what are you thinking? Alas, the good cop/bad cop routine is cut short by the arrival of a pair of gunmen who burst into the station and open fire on the Mounties.

The doughy cop who roughed up Golgo takes a karmic jolt to the shoulder, but Togo takes the shooters out, frees himself from his handcuffs and forces the gunmen’s wheelman (actually a woman) to drive him far away. The unwounded copper puts his finely-honed Canadian brain to work and comes up with a possible answer for all this madness: Could it have something to do with a Russian mole in the CIA who recently escaped into the area, waiting to be extracted by his komrades? (Hint: Yes.)

Meanwhile, Togo and his captive check into a hotel where he sedates and strips her, though for strictly pragmatic reasons rather than for the sake of naughtiness: It’s far below freezing and the woman can hardly make her escape naked. In fact, she tries to seduce him, which results in him stuffing a few more knockout pills in her mouth. That leads to this pair of panels, which look pretty damning out of context: 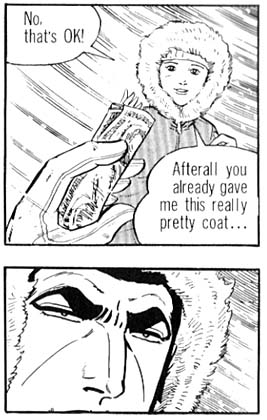 No, he’s not soliciting questionable favors from an underaged girl, honest… she’s the housekeeper for the hotel he’s staying at, and he’s simply offering her a tip to clean the room while he steps out for business. She refuses his generosity, happy to tidy things up while sporting the lovely new coat G13 had already given her as a tip… which is quickly stolen when the Russian gunwoman, who was simply feigning unconsciousness, cold-cocks her and takes all her clothing, leaving her sprawled naked on the hotel room floor.

The woman, who turns out to be a Russian agent by the code-name of “Volga-2,” takes off and makes contact with the mole and they head off by snowmobile for a helicopter rendezvous. He drives pretty well considering he has frostbite in both of his feet after camping out in the woods for a few weeks.

As they’re cruising along to the rendezvous point, Volga-2 suddenly realizes that her code name is 11 less than Golgo-13 for a reason, and that part of the reason the British lost the American Revolution was because they wore bright red coats that made them sitting targets.

(Full page presented here for your reading pleasure. Be the first to Photoshop Admiral Ackbar into the last panel and earn the questionable esteem of your FARK peers!) 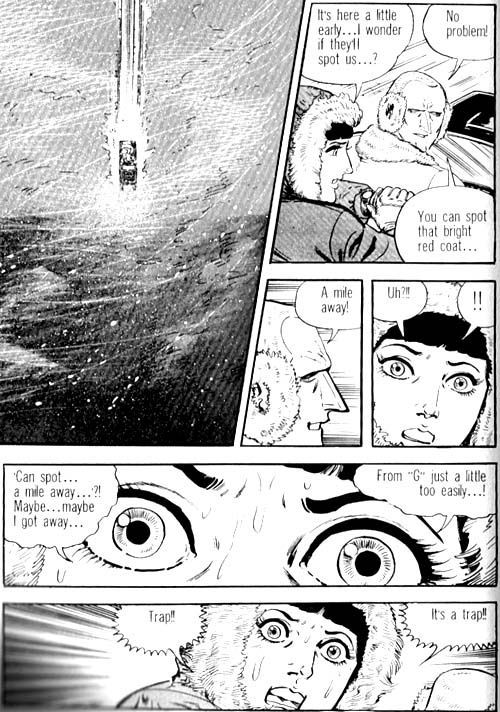 Needless to say, it all falls into place as Golgo snipes them both in a single shot. The moose were practice, his capture intentional, and nothing can stop Mr. Togo. Much to the chagrin of the Mounties, who shake their fists impotently as their quarry escapes into the night.

The second half of Ice Lake Hit is so dopey I couldn’t even be bothered to check the title. But what do you expect? It’s doomed from the start when the tale begins in Lamesa, Texas and quickly moves a few miles away to my hometown… 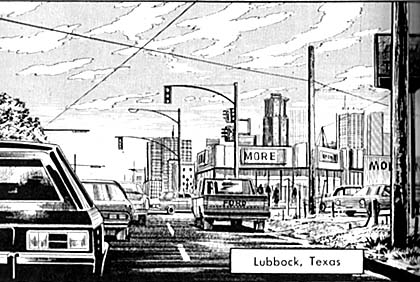 Although admittedly it’s no version of Lubbock I’ve ever seen. Where did those tall buildings come from? I think Lubbock, despite its quarter-million population, has a grand total of six buildings that exceed three stories. Even more amusing is the city sheriff’s wearily protests that there have already been several suicides and murders in town that very day. Lubbock, Texas: Come for the small-town feel, stay for the big-city crime rate.

Anyway, the story is that some woman finds her ranch hand dead and her beloved horse Whitey missing. After the local constabulary fails her, she turns to the only possible option… No, not the A-Team. Golgo-13.

How a pampered WASP from West Texas knows how to contact the world’s most ruthless killer is never actually stated (maybe she’s a friend of the Bush family?), but she demands vengeance for her poor horsey (after gushing a little too much about his sheer magnificent perfection). It’s stupid, but it does at least offer a tiny sliver of insight into the working credo of the enigmatic G: 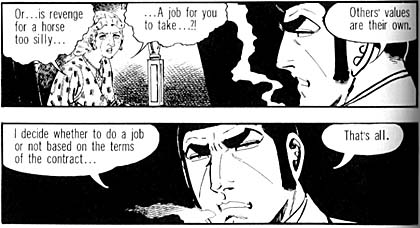 In other words, shut up and give me your cash.

Meanwhile, we move west a ways to Carlsbad, New Mexico where a gang of teenage ruffians on dirtbikes is terrorizing the town. Apparently Saito based this story on teen rebel flicks from the ’50s and ’60s, because both the story and the “old people suck!” dialogue are like something you’d see on one of those painfully generic rebel flicks they mocked on MST3K.

There’s not much tension to this one — Golgo makes contact with the kids, gets a motorcycle, outraces them and disables them as they’re slaughtering cattle. (Graphic horse-killing scenes, including the castration of a shockingly well-hung stallion, tastefully omitted here.) No headshots this time; apparently G13 doesn’t kill minors, he just shoots their bikes out from under them.

He finally catches up with the gang leader and breaks the kid’s arm to find the ringleader of the horse-killing ruffians, which results in some rather laughable legal threats…. 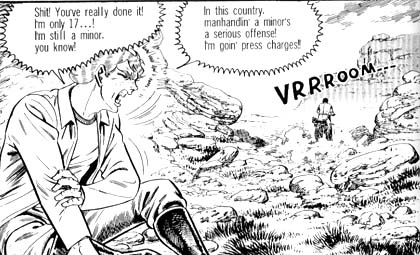 Last I heard, kid, you can be tried as an adult in Texas at age 16. Still, the prospect of Golgo-13 in court defending against a civil suit is almost too good to pass up. Sadly, we must; he tracks down the man behind the plan (the middle-aged guy who was dissin’ the oldies) and kills him, and the comic ends. I think that qualifies as a mercy killing.

Previous examples of Golgo Time can be found here, here and here. And for those curious about where to find these books, I located mine at Allibiris, a sort of rare bookseller’s marketplace. Given its nature, Allibris’ prices fluctuate quite a bit and seem to have gone up quite a lot since I bought mine. Possibly fueled by the intense popularity and demand driven by this feature. Or maybe not.