1. Today’s entry continues the trend of being huge and image-centric, so I’ve moved a goodly chunk to an interior page. You can read it all by clicking the link at the bottom of this front-page prelude, or just click here.

2. toastyfrog.com is one of Google’s top 10 results for “how to make someone else vomit.” I win, Internet. I win so hard.

It stands to reason that after nearly 40 years of Golgo-13, not every episode is a winner. When your main character is a complete cipher of a killer whose range of emotion includes two stops — stoic intensity and mild surprise — there’s only so much heartstring-tugging you can pull off. So just to be clear on the point, this isn’t art. (Perhaps you’re thinking of Electroplankton?)

Every chapter of Golgo-13 carries with it a minimal threshold of expectation. We always know that someone’s gonna die, and somehow, Duke Togo’s gonna get away with it… even if he has to break the Ridiculousness Barrier in the process.

Such is the case in the second volume of manga Lead translated back in 1986, Galinpero. Not once but twice the Inexorable G goes to utterly preposterous lengths to fulfill his contract. But it’s OK, because in the end his victims remember to sputter, “This is no man! He is a demon/monster/entire Army regiment left to boil so long that it reduced down to a single man containing a lethal dose of regiment concentrate!”

Galinpero is interesting for two reasons: It gives a small insight into what Golgo finds “acceptable terms” for taking a contract, and secondly it shows that he’s so valuable to high-ranking members of the U.S. government for his ability to do their dirty work that they’ll let him get away with pretty much any crap he wants to. He could probably punch the President in the face and Cheney would sputter, “Don’t shoot! You’re no match for this man. And who else can we hire to kill Michael Moore!?” 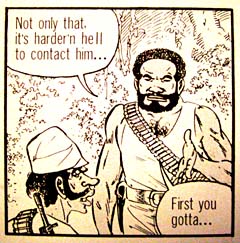 Our story begins when a small Amazon village is slaughtered and/or abducted (depending on gender) and one of the last survivors tracks down the dirty galinperos (diamond prospectors turned bandits) what done it. He kills a few and takes a couple of lethal wounds for his trouble, but not before the thugs offhandedly discuss how much of a badass Mr. Togo is and off-camera-ly reveal the secret to contacting him.

With his dying breath, the (now temporary) survivor sends up the Golgo-signal and begs the world’s deadliest man to wipe out the galinperos and the thuggish, unreliable local authorities too, for good measure.

(For reference, The Golgo-signal is a spotlight that projects the number 13 against the clouds.)

Golgo initially refuses, but then the guy kicks the bucket and leaves his payment, a bag of diamonds, sitting on the table. Rather than just leave the stones there, Golgo takes them and, by extension, the contract. 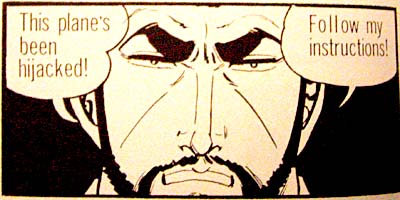 Then he goes about things in the most over-the-top manner imaginable. While he could just take out his marks while down in the Amazon, he instead heads north to the U.S. and hijacks a commercial jet-liner. This aggression would not stand nowadays, but I guess in the ’70s they let passengers carry handguns onto the plane under the honor system.

The plane stops over in Miami just long enough for the passengers to disembark, and Golgo intimidates Reagan, a Kissenger-looking hostage negotiator, into handing over 1.5 million dollars in exchange for a briefcase. As it turns out, the briefcase he gives the U.S. contains precisely 1.5 million bucks as well. He may be guilty of murder, hijacking and general acts of terror, but at least he doesn’t steal.

Golgo forces the flight crew to fly the empty passenger jet back to the Amazon where he parachutes with his valise of cash, drawing the attention of every galinpero and soldier in the region. Naturally, they all converge on his location at once, freeing him up to blow them away with his sweet armored ride (complete with recoilless rifle and grenades aplenty).

Oh, and also a rocket launcher.

So, everyone’s dead except Golgo, making it look like a really conclusive internal skirmish between factions. But Kissinger Reagan knows the truth, which he mainly uses to frighten himself into incontinence.

What kind of devil—!? The kind with a custom M-16, of course. It’s like you guys weren’t even paying attention. 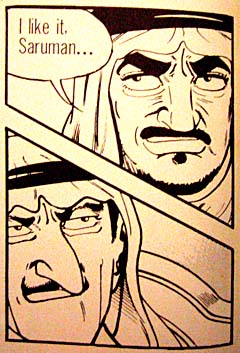 The back-up story is equally overblown, and generally sort of uncomfortable to boot. A Saudi princess is sexually assaulted and murdered. Enter Saruman, who sadly is not a wizard but just an overzealous Saudi cabinet member. (In a less-contemporary Middle Eastern setting, he would have played the role of Grand Vizier.) Saruman freaks out when his niece is murdered and tracks down Golgo-13 to his hideout, or possibly a Swiss hotel — it’s hard to tell — and demands he kill the woman’s murderer within ten days.

Needless to say, the not-a-wizard is a bit perturbed when the killer turns out to be his own nephew. The prince is actually pretty remorseful, but the royal family is eager to cover up his complicity, hiding the facts from the world at large under cover of diplomatic immunity and internally blaming it on Mossad mind control. Meanwhile, since the murder happened on American soil, U.S. authorities decide to use it as a lever for pressuring Saudi Arabia into officially recognizing Israel as a nation.

Rather than simply cancel Golgo’s contract, Saruman sends a team of secret assassins to kill him. A few dead doormen and hotel maids later and Golgo is the last man standing, because No One Can Stop Mr. Golgo! 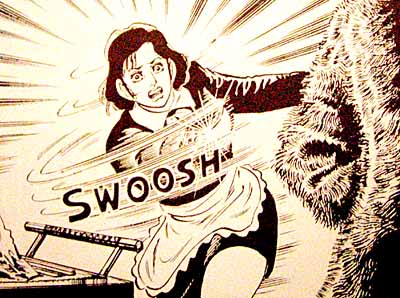 Especially when he’s pimpin’ big in a full-length fur coat.

Even after the Hari Dju assassins are killed, Saruman stupidly refuses to cancel the hit, instead trying to protect his nephew inside a desert citidel. With minutes left to go on his ten-day limit, Golgo infiltrates the city and lines up a perfect shot, sniping the prince as he faces Mecca during his daily prayer.

Oh, and he does it sniping nearly blind — bouncing his shot at a 110-degree angle from a nearby onion dome. Really, that’s so contrived he might as well have just flown into the citidel and blasted the kid with eye lasers. Custom M-16 eye lasers. 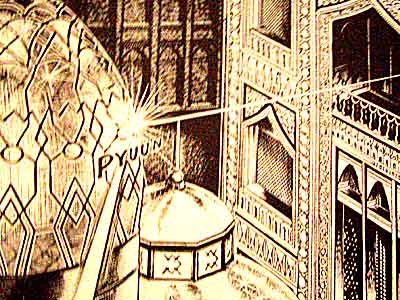 Saruman has no one to blame but himself (and the contrivances of the plot), but that doesn’t stop him from interrupting his prayer to face down Golgo in a one-to-one duel in the desert. If nothing else, it’s definitely a faster way to commit suicide than slicing his wrists in a warm bath… but far more painful than running his car in a sealed garage for a few hours.

The upshot is that, with the killer dead, the Saudis decide they don’t have to dance to the Americans’ tune and decide not to recognize Israel after all. And here those Mossad guys thought G-13 was on their side.