Look up on these nerds, ye mighty, and despair. You’ll probably despair over the image quality, too. Sorry, these are 20-year-old books printed on mediocre paper and my scanner is crap. 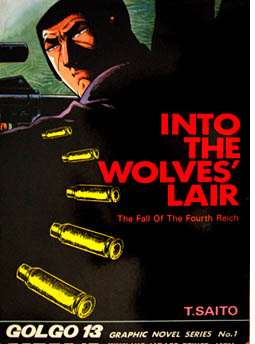 The Journey into Golgo begins here with “Into the Wolves Lair,” the first Golgo-13 graphic novel to have been published into English. It was not, however, Duke Togo’s first adventure, having been published in Japan some ten to 15 years after his 1968 debut. You can tell this is a late ’70s/early ’80s job because people keep name-dropping George Lucas (it’s even a plot point) and there’s a billboard for “The Star Wars III.” So obviously this preceded 1983’s Return of the Jedi, at which point most people looked at the Ewoks and said, “Oh wait, Lucas is actually a money-gobbling merchandise-creating hack and not in fact a latter-day genius.”

Don’t feel bad, we were all fooled.

I’ve only owned “Into the Wolves’ Lair” for about three weeks, but it already holds a special place in my heart — mainly for proving that I am not, in fact, completely delusional. Back around the time I discovered the Golgo milieu courtesy of an NES game that inexplicably had its controls reversed (stupid Vic Tokai, everyone knows A is for jump, not B) I saw this graphic novel promoted in a random gaming publication I was skimming through. A few weeks later I found the first comic-sized issue at the local convenience store and kept watching for this enticing chapter about taking down the Fourth Reich to show up as well… not realizing it had been published three years prior. Over the years I’ve checked price guides, comic shops and the whole of the Internet to confirm its existence, but no one ever seemed to know anything about it until I wandered across the official Golgo-13 web site, which has a tiny shrine set aside to the handful of related materials to have made it into English.

It took 15 years, but it’s nice to learn I wasn’t just imagining things as a kid. Now I just need a little reassurance about my current mental competence and I’ll be set.

So, Golgo-13. Like I said before, he operates according to a strict (but as-yet-unrevealed) code of ethics; he never kills unless it’s in self-preservation or to complete a contract, he only takes jobs from employers who play by his rules and always fulfills his task, and there are certain jobs he won’t take. But he does at least pass the modern baseline moral test: He goes after Nazis with gusto. Everyone hates Nazis, except maybe the Nazis themselves, so that’s good. It’d be kinda tough to take up the cause of a guy who ices people on Der Fuhrer’s request.

Anyway, looks like those wily Nazis — or as they’re called in hi-larious NES manuals, “Ratzis” — have decided that their decisive defeat in WWII and subsequent pummeling by every fictional character from Captain America to Indiana Jones wasn’t sufficient proof that Aryans are nothing special after all and have regrouped under a mysterious shadowy Fuhrer who loves to clutch Adolf Hitler’s personal gold-plated Luger in his private moments alone.

Not surprisingly, the collective nation of Israel wants these guys’ secret lair (hidden beneath an art museum in Buenos Aires) eradicated, and they hire Golgo-13 to do the trick when a Mossad infiltrator finds himself captured… even though the big G popped a bullet into the brain of the girlfriend of one of Israel’s bigwigs. 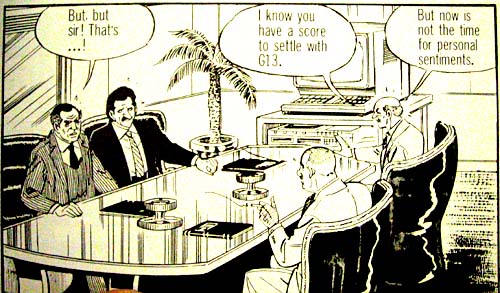 This is all straightforward enough until Mr. Togo decides that his best means of infiltrating the Wolves’ Lair is to snag its security blueprints from an Israeli mole and have a Hollywood crew construct a perfect duplicate of the building in just three days. This attracts the attention of a Hollywood reporter who, thinking it’s “a new Lucas flick,” sneaks in just in time to witness Golgo perfect his infiltration routine. Our anti-hero confiscates his film, but then decides that’s not enough and snipes the reporter a few minutes later. 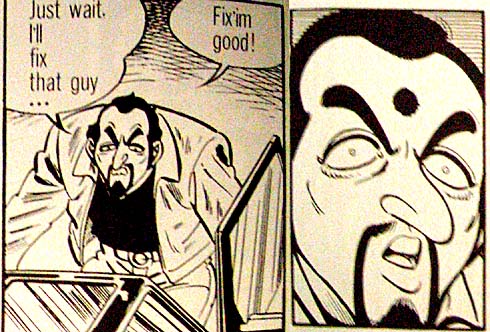 Fool! He can read your word balloons from 100 meters.

Anyway, that entire plot branch turns out to be pointless since the Nazis go on alert the instant Golgo takes out the security cameras and he’s forced to wing it anyway. More Lucas contrivances come in the form of a sliding security door — shades of Raiders of the Lost Ark.

Except here Golgo props it open with his machine gun. Let’s see you try that with your fedora, eh Indy? 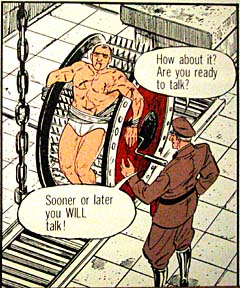 Massive carnage ensues, with Golgo basically mowing down wave after wave of Nazi while Mossad sends a few agents to sneak in and rescue their captured agent David, who by this point has been subjected to every form of torture imaginable (much of it “on-camera” to make you realize that when Mr. G ventilates their skulls it’s well-deserved come-uppance). 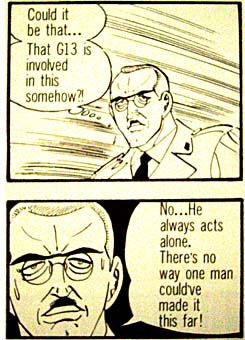 Meanwhile, everyone agrees — this can’t be the work of just one man! It must be an entire army.

Eventually, after shooting, exploding, gassing and burning every Nazi in sight, Golgo comes to the heart of the fortress where Der Fuhrer has rather anticlimactically died of a heart attack (or maybe suicide pills, it’s hard to tell). The big twist is that it isn’t Adolf Hitler at all, but rather Martin Bormann.

Well, I thought it was a surprise. But then, my first G-13 experience involved shooting flying Hitler clone heads out of the air, so maybe I was prejudiced.

Anyway, Golgo-13 shoots a few holes in Hitler’s portrait, kills the rest of the Nazis and burns millions of dollars worth of art as collateral damage when the museum over the bunker goes up in flames. As they drive away into the night, the Mossad guys agree: G-13 is pretty wicked awesome. Fer sure.

The back-up story in this volume is a short caper in which Golgo-13 finds himself trapped in Soviet-occupied Afghanistan after sniping a high-ranking Russian general. Despite a bit of betrayal that ends up with him being hopelessly cornered, he naturally prevails. Highlight: Trapped without his custom M-16, he uses a steel clamp and a tiny hammer to fire a machine-gun bullet right into a bad guy’s head, then backs over the rest with a hotwired van. 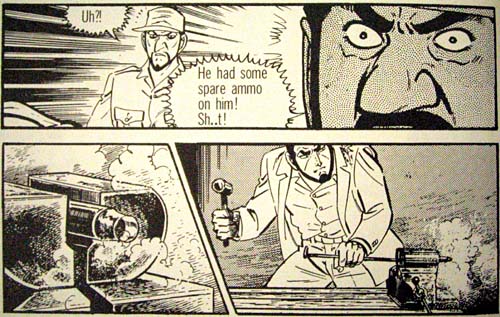