There are just a few phrases that can knock gamers into an instant coma these days through force of their sheer oversaturated abuse over the past year or so.

But none of these phrases are more annoying and tiresome than the new poster child for posturing pseudo-intellectuals everywhere:

Actually, the question itself isn’t so bad, but the debate surrounding it is enough to send most people into a murderous rampage. What could be a valid analysis of the legitimacy of this burgeoning medium typically degenerates into a bunch of snotty kids calling Roger Ebert names and a handful of self-proclaimed intellectuals with no actual art education stroking their chins excitedly at the chance to use a lot of very large words. It would be too easy for them to offer a simple, empirical analysis, though, so they mostly talk about how Ico was all ethereal and made them so very sad, or how Rez made their pants throb even without the Trance Vibrator.

I’m glad Electroplankton has come along to put this ridiculous debate to rest. It’s an authentic work of art, which means that games can be art, thanks. Here’s my proof, derived from six long semesters of art history.

I. It’s created by an artist.

Electroplankton’s designer and programmer, Toshio Iwai, is an award-winning fine artist who works in multimedia formats. Sound, visuals, even interactivity — the same stuff Electroplankton offers. Iwai’s other work is recognized as art by the stuffy types who make such arbitrary calls, so disregarding Electroplankton simply because it’s presented in videogame form is so narrow-minded as to be downright churlish. And no one wants to be a churl.

II. Art can be mundane.

Boo hoo, it’s a videogame, and you can buy videogames at Wal-Mart. Art could never be that gauche!

Yeah well, whatever. Marcel Duchamp poked a hole in that one almost 90 years ago when he presented “Fountain,” which was simply a discarded urinal on which he had scrawled the words “R. MUTT 1917.” Two years later he defaced a reproduction of the “Mona Lisa.” It was not medium, technique or skill that made Duchamp’s dadaist works art, but rather the creative intent behind the work. 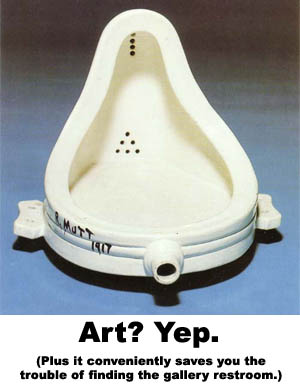 Need a more relevant example? A few years back I visited the Metropolitan Museum of Modern Art in New York City and stumbled across a work by Jennifer and Kevin McCoy called “Every Shot, Every Episode.” The artists had dissected 20 episodes of the Starsky & Hutch TV series and indexed each scene according to one of 300 categories (“Girlfriends,” “’74 Ford Torino,” etc.), which were then recorded to a massive stack of CD-Rs and played at random for passersby.

Electroplankton’s manual offers a brief dissertation by Iwai on his inspirations and ambitions with the game, all of which are sufficiently high-minded (a synthesis of audio-visual experiences based on microscopes and Famicoms, etc. etc.) to place the game in the same genre as “Every Shot, Every Episode.” If Huggy Bear and a toilet can be art, then by all means, so can Loomiloop and Tracey.

Besides, you can’t buy Electroplankton at Wal-Mart… just Target and online. It’s classy. And if you really need the extra validation, send your copy of the game to me with an SASE and I’ll scrawl “R. MUTT 2005” on it for you.

III. Art can be mass-produced.

One might argue that the merit of works like “Fountain” and “Every Shot, Every Episode” (as well as the works of other multimedia artists like Nam Jun Paik) is due in part to the uniqueness of those works — they exist as single installations. Electroplankton, on the other hand, is a mass-manufactured consumer product churned out by the thousands, and even the original game was the collaborative creation of a team of programmers and artists working with Iwai.

The corpse of Andy Warhol laughs in your face. His works like “Marilyn” were mass-produced, frequently by people working for Warhol rather than by the artist himself. This doesn’t make his work any less valuable — any one of the countless silkscreens produced under Warhol’s supervision is worth tens of thousands of dollars and would proudly be displayed by any art museum. 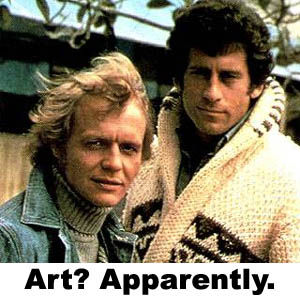 IV. Art doesn’t have to resonate with you to be art.

“But videogames don’t move me.” Congratulations, you didn’t cry when Aerith died and you think Lumines is boring. Aren’t you manly? Well done. Me, I don’t really find my heart atremble when I look at pretty much any American art prior to the 20th Century, but if I were to walk up to a curator and demand he remove Whistler’s Mother from his collection I’d probably be shot on sight. Disregarding a piece of art because you don’t get it puts you in the same category as those who laughed at Monet’s “unfinished” paintings or the jarring chaos of Picasso’s first forays into cubism. These days we call them “MORANS.” (We used to call them “morons” but the Internet has knocked the collective I.Q. of humanity down a few digits and we don’ rite so good no more.)

In any case, I’ve found Electroplankton to be entrancing, so it still meets this particular proof. Sorry if you’re too thick to get it, though.

V. This is stupid, shut up already.

Well, that’s what I’ve been saying all along.

Anyway, Electroplankton fits every definition of art, so it’s art. And a game. Which means that by the Transitive Property of Have a Little Common Sense You Idiot, games can be art.

Potentially, of course. Kingdom Hearts is no more “art” than a black velvet painting of Mickey Mouse. But everyone can shut up about this whole stupid debate and get back to the basics, like how EGM is simultaneously biased against Nintendo, Sony and Microsoft.

As for my next trick? I’ll be sorting out the world peace thing.